A new to us ship on THE Alliance's EC5 service arrived in Halifax June 11. Hyundai Faith is a 95,681 gt, 98,967 dwt vessel built in 2008 by Hyundai Samho, with a capacity of 8562 TEU. It is among the largest container ships to pass beneath the harbour bridges. (Passing the A.Murray MacKay bridge in the photo below.) 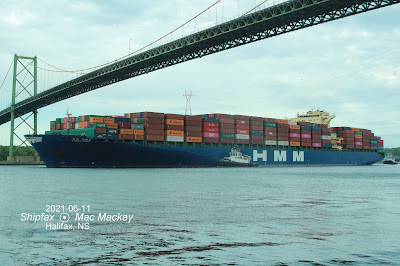 The ship has limited its air draft by eliminating or reducing masts and other devices above the navigating bridge top. 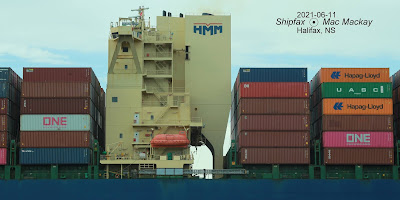 The HMM (formerly Hyundai Merchant Marine) logo appears on the housing of the exhaust gas scrubber, which appears to have been installed after the ship was built,

HMM Co Ltd is now a fully fledged member of THE Alliance with HAPAG-Lloyd, ONE and Yang Ming. When THE Alliance was formed in 2017 Hyundai Merchant Marine was on very shaky financial ground and was only allowed to participate by means of slot charters. However by 2020, after posting to a large contingency fund that would guarantee operation of the company's ships in case of bankruptcy, the US Federal Maritime Commission granted membership. At about the same time the company rebranded itself as HMM Co Ltd. 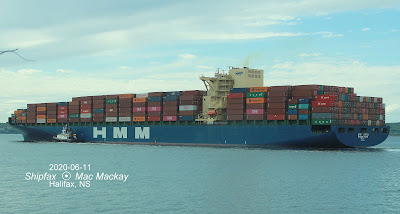 The company recently added to its 75 strong fleet with a pair of ships, each exceeding 23,000 TEU.