Business, more or less as usual

September 30 was observed as a Canada's first National Day for Truth and Reconciliation. However it was not declared as a statutory holiday, so some businesses remained open. Others closed out of respect for Canada's indigenous population and in particular the victims of the residential schools program.

Even the port of Halifax did not have a consistent approach. PSA Halifax reduced its truck gate hours to a half day - 0800 to 1200 but Cerescorp kept its truck gate closed for the day. Both terminals had ships alongside however, and they were worked as usual. 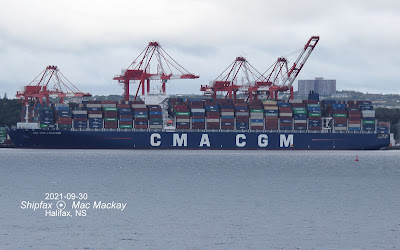 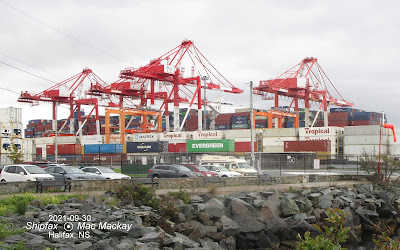 There are reports that PSA Halifax has confirmed its order for another super post-panamax crane, which it certainly could use if it is to handle two ships of this size at the same time.
Cerescorp was also handling a very large ship for its facility. ONE Hangzhou Bridge is a 96,760 gt, 96,980 dwt ship with a capacity of 9120 TEU. It was built for K-Line by IHI Kure in 2012 as Hangzhou Bay Bridge and renamed in January 2021 and given its new hull colour. The ship made its first call here on THE Alliance's EC5 service June 28, 2021 and is scheduled again for October 20. 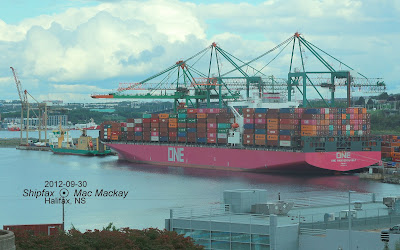 Fairview Cove could also use a new crane to replace the old crane at the far end of the pier. It seems to be out of service. ONE Hangzhou Bridge shares the pier with the Nolhan Ava which makes its usual weekly sailing to Argentia and St-Pierre on Fridays.
Imperial Oil also had an arrival today. Quartz brought in a cargo of refined product from Beaumont, TX. 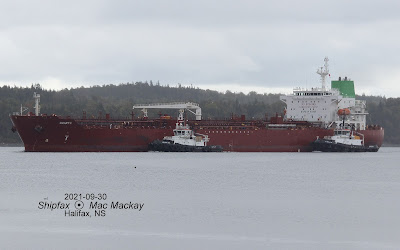 The ship is operated by Sinokor Petrochemical Co and was built by SPP Shipbuilding Co, Incheon, South Korea in 2015. The ship is a 29,767 gt, 49,990 MidRange type.
At Pier 9C it was a return call for the United States flag bulk carrier SLNC Severn. It was here for the first time June 26, 2021 for a compliance inspection by Transport Canada. 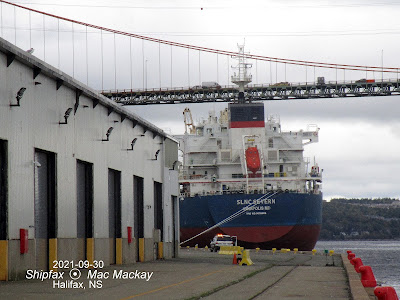 This time the ship appeared to be taking bunker fuel (under the watchful eye of the Canada Border Services Agency). The ship's operators Schuyler Lines Navigation Company (SLNC) have been carrying aggregates from Auld's Cove, Strait of Canso, where there are no bunkering facilities. The ship has also been reported in the South Atlantic (Saint Helena), and Cape Verde and the Canary Islands recently.
.