With ships carrying cars and trucks much in the news lately (more on that below) the Pure Car and Truck Carrier Grande Florida arrived at Autoport this morning February 21 with vehicles loaded in Gioia Tauro, Italy. 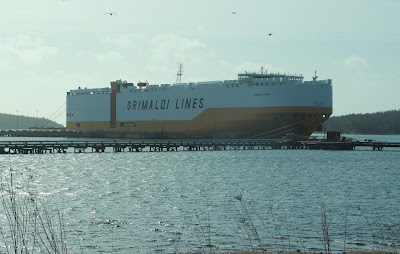 The ship made its first call in Halifax in October 2021. I managed to catch the ship outbound  and its yellow hull certainly stood out on tnhat clear day. (There was light haze in Halifax this morning.)

Car manufacturers are building inventory for the usual spring sales rush and Autoport is chock-a-block with vehicles of various brands. Autoport also preps and stores cars and dispatches them by train, truck (or ship to Newfoundland) on demand. 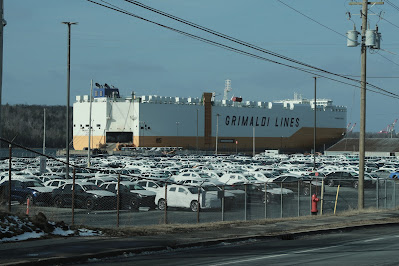 Grimaldi Group, owners of the Grande Florida are also the owners of Grimaldi Euromed, the operators of the unfortunate car and truck ferry Euroferry Olympia which caught fire February 18 off Corfu while en route from Igoumenitsa, Greece to Brindisi, Italy. A huge rescue and fire fighting operation managed to save 281 people, including two stowaways, but ten truck drivers are still missing. There were reported to be 153 trucks and 32 cars on the ship which will be towed to a nearby port. Salvors have already boarded the vessel and begun the task of recovering remains and extinguishing hot spots. It is believed that the missing or dead truck drivers were sleeping in their trucks on the car deck. There may also have been more unrecorded migrants.

Meanwhile off the Azores salvage vessels are en route from Gibraltar and Rotterdam to the burning autocarrier Felicity Ace. All 22 crew were rescued, but the ship is in danger of sinking as the fire has not been extinguished. Salvage experts have said that the burning batteries of the many electric cars on board add to the difficulties of fire fighting. Temperatures of 1500 degrees C (where steel melts) and 2000 degrees C (when water atomizes, and foams do not work) may mean that allowing the fire to burn itself out will be the only option.

The most recent reports I have seen say that there were 3,965 cars on board, including 1100 Porsches and 189 Bentleys with a value of $255 million (USD). Most of the cars were  German built and loaded in Emden. The ship was bound for Davisville, RI when the fire broke out February 16.

By coincidence, its last visit to Halifax was also in October 2021. 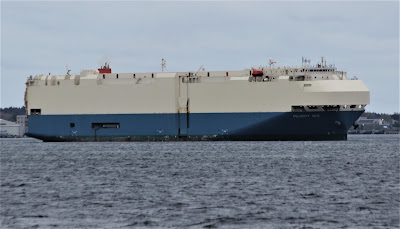