On February 16, 2021 the Panama flag auto carrier Felicity Ace reported a fire on one of its cargo decks. The ship was 90 nautical miles SSW of the Azores bound from Emden, Germany to Davisville, RI carrying approximately 4,000 Porsche and Volswagen cars. 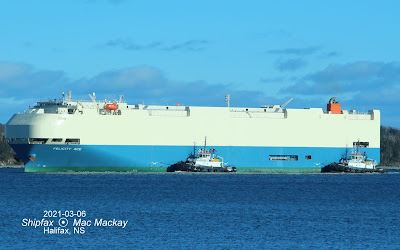 The ship is a sometime Halifax caller and was in port in March and October last year: http://shipfax.blogspot.com/2021/10/more-cars.html

The most recent reports indicate that the crew of 22 have been evacuated from the ship and that salvors have been appointed under  Lloyd's Open Form "No Cure - No Pay" agreement, with a tug underway to take the ship in tow.

I am sure more details will emerge, but at this time (1800 hrs AST February 17) there was nothing else to report.