On Wednesday, February 16 Oceanex informed its valued customers by e-mail / letter that there will be a delay in the return to service of the Oceanex Sanderling. The workhorse of their weekly Halifax to St.John's service was sent to Amsterdam for mandatory drydocking at the end of 2021. The drydocking / refit, required in order to maintain the its classification, was to be a particularly thorough one in view of the ship's age. Regular five year "surveys" become more and more onerous with time and a ship that is 45 years old must be "put through the wringer" to maintain its status.

According to the Oceanex letter the planned four to five week drydocking has been extended due to unexpected additional repairs that must be completed during this work period. That sounds serious, so apparently involves some major component or system that must be rebuilt or requires the fabrication of something new before the ship can sail again. The ship's classification society DNV GL (Det Norske Veritas / Germanischer Lloyd) like Lloyds Register, Class NK or other similar organizations has very strict standards to ensure the safety and integrity of ships (and thus the safety of the cargo they carry). Maintenance of Class rating is critical to the insurability of ship and cargo, but also to the continuation of the ship's registration by its flag state.

The "bottom line" of the Oceanex letter is that Oceanex Sanderling is not due to return to service, until its sailing from Halifax June 17, 2022!

In the meantime the company's other two ships, Ocean Avalon and Oceanex Connaigra will continue with alternate weeky sailings from Montreal and Halifax. That will mean RoRo service will only be available every two weeks from each port. It also means more business for Marine Atlantic and TSMI (Transport Maritime St-Pierre International, which runs from Halifax to Argentia) but with a high level of inconvenience for shippers and Newfoundlanders in general. In fact Marine Atlantic may be obliged to add sailings.

As I have stated before the Oceanex Sanderling is a ConRo (container and RoRo ship) and is a comparatively rare type ofvessel and a major investment compared to straight container ships. It might have been replaced years ago if a suitable replacement could be found at a reasonable price. Even a short term temporary substitute would be nearly impossible to find, since all ships of the type are in dedicated service elsewhere. 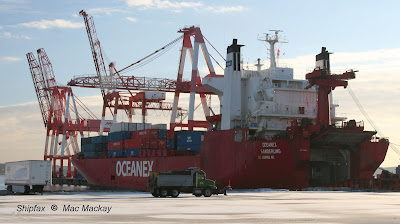 One of the important features of the Oceanex Sanderling is the slewing stern ramp, which can be turned to suit the docking arrangement.

The Oceanex letter contained no detail as to the nature of the unexpected work, but in view of the definite return to service date, they must be confident that the repair can be made. 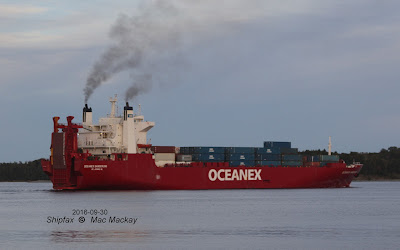 For a time the ship was a 'heavy smoker" but that was fixed during a previous refit.

While the Oceanex Connaigra (pictured in yesterday's post) is also a ConRo, the third member of the fleet, Oceanex Avalon has no RoRo capability.

Seen here doing 19.9 knots on the St.Lawrence, Ocean Avalon must contend with ice this time of year, and "slow go" whale zones in season in order to make its weekly trips to Newfoundland.