The British naval support ship SD Victoria arrived this morning February 10 at HMC Dockyard. The 3522 gt ship dates from 2010 when it was built by Damen Galati in Romania. 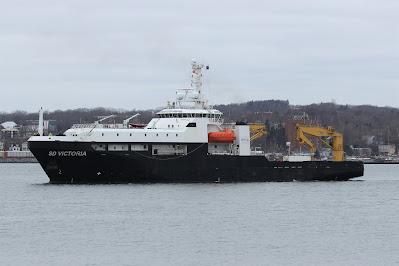 The ship is owned by Serco Marine Services a division of the Serco Group, a publicly traded company that provides services to the British government. Serco Marine Services operates "fleet support" at the Royal Navy's primary bases, replacing the Royal Marine Auxiliary, which was thus disbanded in 2008. Ships bear the initials "SD" for Serco Denholm, the previous name of the company. Denholm was a ship management company and partner in Serco Marine Services that Serco bought out in 2009.

Serco Group is a huge organization,. For more information I suggest the Wikipedia entry under: Serco Group

SD Victoria provides "world wide support" to ships of the Royal Navy and apparently ranges far afield. The ship was reported in Portsmouth, UK in mid-January, and in recent days it was hove to off Yarmouth, NS during a period of high winds.