Container lines keep adding bigger ships to their fleets, and placing them on routes that once were served by much smaller ships. This certainly places pressure on the ports and terminals they visit to be able to berth and serve the larger ships efficiently. PSA Halifax is able to handle two "Ultra" class ships (larger than 10,000 TEU, 350m long) at the same time. Thanks to the most recent extension to Pier 42 they can berth the ships, but they do not yet have sufficient cranes to work the ships efficiently.

One new crane is reported to be on order and there is an option for another. But with build times of up to 18 months, crane manufacturers have backlogs and it will years before the second crane arrives. By that time even larger ships will be calling and there will likely be demand for even more cranes. Certainly if there are two Ultra class ships, or even two moderately large ships in port at the same time, they need to be served quickly or the port loses advantage over other ports.The Port of Saint John will apparently be getting some cranes second hand from Prince Rupert, BC. Terminal operator DP World took delivery of the largest crane in Canada in Prince Rupert in June 2021, and will transfer a pair of older cranes to their newly enlarged Saint John operation.

Today's arrival at PSA Halifax seems to have had a domino effect on other ships. 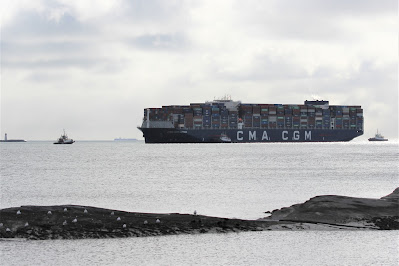 CMA CGM Hermes arrives this morning February 9, while ZIM Vancouver continues to wait at an outer anchorage (it has been there since at least February 5). The ship used all four harbour tugs to berth, including Atlantic Oak the stern tethered escort tug that met the ship off the pilot station, (in the photo the fourth tug is not visible on ship's starboard side) . 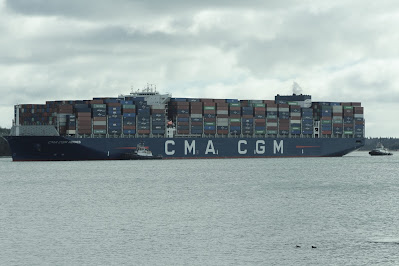 CMA CGM Hermes was built to Tier III emission standards and has numerous eco-friendly features. Builders are reported by some sources to be Shanghai Jiangnan Chiangxing Shipbuilding Co Ltd, and by others as Hudong-Zhonghua Shipbuilding Co (the latter may be the parent company - both are state owned).

PSA Halifax is also expecting the MSC Leigh later in the day, so will be full with its arrival.

The Fairview Cove container facility at the north end was also busy with ONE Majesty at the west berth on THE Alliance's AL5 route. It was joined by the MSC Tianjin (see February 7 post) on the Indus2 run, which had moved from PSA Halifax to Bedford Basin anchorage and moved again today, to Fairview Cove's east berth. 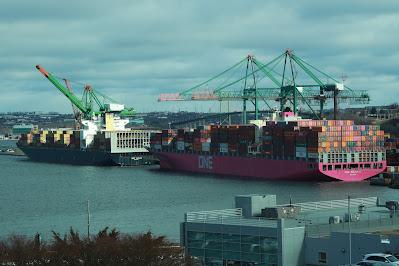 It seems that Fairview Cove may have been doing PSA and MSC a favour by allowing the MSC Tianjin to use the east berth, likely for repairs, since it did not appear to be working cargo. There is still no word on whether PSA's takeover of the Fairview lease will be permitted under the competition laws. Cooperation between the two is not unheard of however as the Southend terminal under Halterm operation and now PSA has accommodated ships in the past that were too large to reach Fairview Cove. 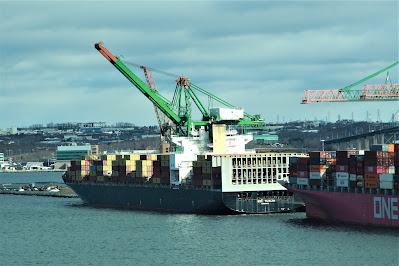 MSC Tianjin, as previously reported, arrived off Halifax February 4 and anchored for a time until entering port on February 5. Built in 2005 by Samsung Koje it is a 89,097 gt, 105,528 dwt ship with a capacity of 8063 TEU, including a very large capacity of 1400 reefers. It was built as OOCL Tianjin, renamed GSL Tianjin in 2007 and became CMA CGM Tianjin in 2019.

Note both ships have substantial container lashing bridges at the stern, a feature common on ships built for Pacific Ocean service where large following seas can wash containers overboard.

Stormy weather again February 8, caused Star Pyxis to drag anchor in Bedford Basin, and a pilot was called to re-anchor the ship. It was re-established somewhat to the south of where it had been. (See previous post). 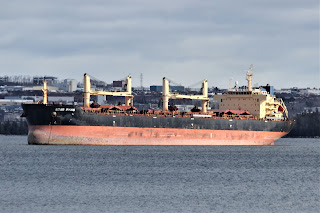 I like to get pictures of ships from both sides!

HMCS Kingston has been exercising in the Basin for the past few days with HMCS Summerside. While the latter was nowhere to be seen today, Kingston was in an unusual anchorage position off Rockingham in an area where large ships don't go. 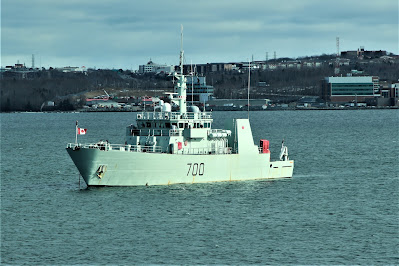