In a January 27 press release, the Port of Halifax formally confirmed plans to fill in the space between two of the deep water piers and to demolish two large cargo sheds. The project will create an additional 3.2HA ( 8 acres) of onsite container storage for the southend container terminal operated by PSA Halifax. The space created will more than offset the loss of storage space in the terminal when new rail sidings are built. There are also plans for more reconfiguration of rail outside the terminal

The project will fill in four ship berths (known as pier 33, 34, 36, and 37) which are rarely used now. Ships using the RoRo ramp at Pier 36 will likely be relocated to Pier 30 or will use the existing ramp at Pier 41. Pier C has been extended southward since this map was drawn. The loop track within the terminal has also been removed also.

The sheds at Pier 33 and 34 will also be demolished since they occupy space needed for container storage. The claim that facilities at Richmond Terminals can be used instead fails to recognize the difficult rail access there, so I reckon demolishing these buildings is a net loss for the port.

The area of the blue oval in the (outdated) map above will be filled with 500,000 cubic meters of fill - all of which will be trucked through downtown Halifax over a three to five year period. The fill, which will be largely pyritic slate from building excavations, is acidic  and must be neutralized by immersion in water. Excavation contractors pay the Port of Halifax to dump the material.

When the Ocean Terminals area was constructed just over one hundred years ago, fill came from the railway cut which brought the rail line to the waterfront area. Despite the fact that at least three of the largest quarries in Nova Scotia are now on rail lines, and could send all the required volume of material for this project to the site without using a singe truck,  the Port has opted to transfer its current pyritic slate infill site from Fairview Cove to this location. One has to question the wisdom of sending all these trucks through downtown at this time. Concurrently the City will be demolishing the Cogswell Interchange already creating traffic chaos downtown.

The most obvious solution of bringing in aggregate fill from Auld's Cove by self-unloading bulk  carrier has apparently not been deemed cost effective, since the Port would have pay for it. Instead we will get to see 4,000 to 5,000 trucks converging from all points of the compass on the downtown for three years, on streets already congested with port container traffic.

This all presumes of course that the current building boom on peninsular Halifax continues at the rate it has done for the last five to ten years. Without that boom there will be no source for the slate fill. I personally doubt that the boom will continue for a varietyof factors. Eventually, I predict, to get the project finished in any kind of reasonable timeline, they will have to buy fill. It should be delivered by self-unloading ship or by rail as a far more environmentally responsible means of transport.

It is also interesting to note that a substantial amount of the fill needed to build the South End Terminal in the 1969-70 era, was dredged from the harbour bottom. That would likely not be permitted now due to heavy metals and other contaminents in the harbour, but it might be possible to encapsulate it effectively, as they do with the slate.

The infilling of the deep water pier space will increase the backup land for the Southend terminal, and coupled with planned rail upgrades and bigger cranes, will keep the facility up to date and competitive. The downside will be the added truck traffic in downtown, which will be a major inconvenience to residents for a prolonged period.

None of these three claims is substantiated, and the environmental costs incurred during construction can never be remediated. On balance the project will upgrade the Southend terminal, but all other claimed benefits are questionable at best. 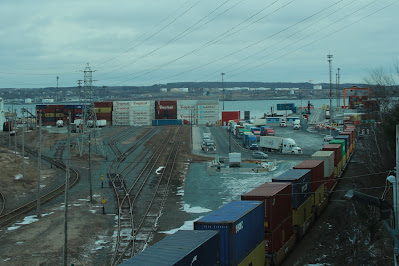 A wall of containers blocks the view of the infill area - 2022 view.. 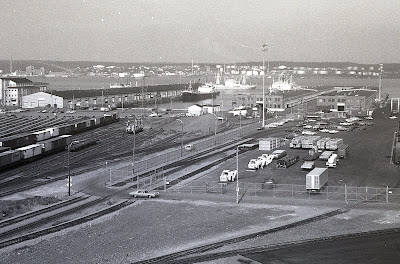