Winter conditions can mean problems for shipping. These can range from severe such as ice damage, to frozen spray on deck or ice clogging sea chests and a whole host of other issues. Halifax is a convenient place to deal with problems that may arise since the port is ice free, there are lots of berths and achorages available and there are technicians nearby for most ship components.

Nevertheless it is rare to see three ships in port at the same time, due to winter conditions. 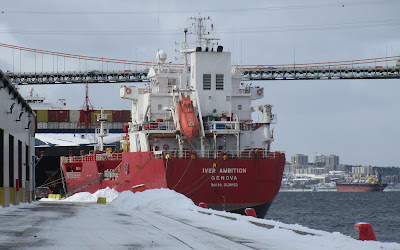 It is even rarer to be able to squeeze all three ships into the same photo.

At anchor in Bedford Basin, the Star Pyxis is still in port (see previous posts) but some progress has apparently been made on whatever issues it had. The ship is due to make trials in the Basin this afternoon (February 15) with a pilot aboard, then move to Pier 9C tomorrow. (The ship is visible in the far right background of the photo above).

The heavy oil / bitumen tanker Iver Ambition arrived at Pier 9C yesterday after discharging cargo in Sept-Iles, QC. The ship loaded the cargo in Antwerp  and completed unloading in Sept-Iles January 31. Why it took two weeks to reach Halifax is not known, but it is likely winter related. 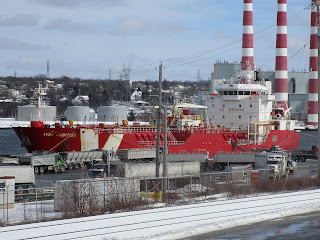 Built as San Lorenzo in 2009 by Kraljevica Shipyard in Croatia the ship retained its Italian flag when it was renamed Iver Ambition in 2015 by Vroon / Iver Ships. The 6296 gt, 8962 dwt tanker carries the Vroon "V" in white on its hull.

Also at Pier 9C is the container ship MSC Jersey. The ship was en route from Le Havre to Montreal when it put in to Halifax yesterday January 14.

Aside from frozen spray forward on the spray shield (see top photo) and on deck, there was no outward sign of any issues with the ship. Pier 9C was busy with trucks moving salt from a large stockpile, but there did not seem to be much activity at the ship itself.

Some ships avoid winter conditions by laying up until spring.That is usually true of Great Lakes ships, as the fresh water freezes up and the locks are closed. However some of the newer classes of CSL and Algoma ships run well after the traditional December layup dates. One such ship, CSL's Baie St.Paul has been busy delivering salt from the Magdalen Islands to St.Lawrence River ports. (It also delivered salt to Halifax late last year.) It has now arrived in Halifax (February 14) for an abbreviated "winter layup". 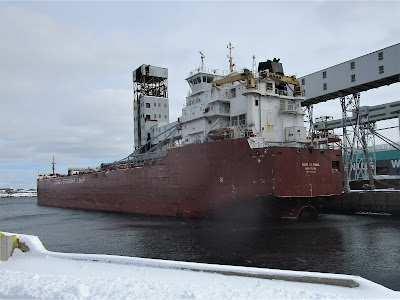 The ship is docked stern in at Pier 25-26, to allow easier access to the ship's machinery spaces. Generally these layup periods allow for major maintenance to engines and other equipment. The ships usually return to service toward the end of March when the St.Lawrence Seaway reopens for the season.