The Southend container terminal operating as PSA Halifax was quiet all week until late this afternoon (February 19) when two ships arrived in quick succession.

The first arrival was MSC Leigh from Montreal, here to top up cargo before sailing on for Barcelona and Valencia on MSC's CANEX2 Mediterranean service. 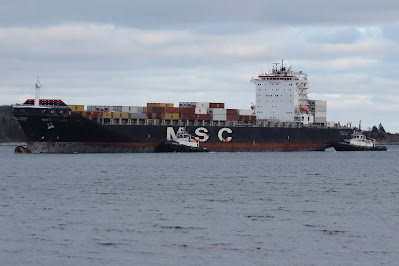 Following soon after, the Canadian flag Oceanex Connaigra arrived from St.John's on the weekly Oceanex service. 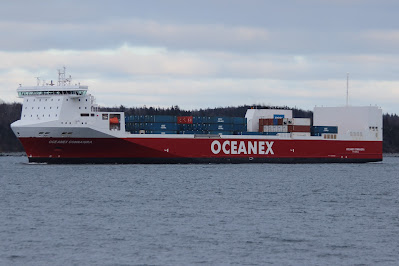 The Oceanex Connaigra and Oceanex Avalon are alternating their weekly Montreal / St.John's trips with Halifax trips while fleet mate Oceanex Sanderling is in refit in Amsterdam.

The Sanderling refit was initially reported to be a five week operation starting in January, but now appears to have stretched to eight weeks or more. The Oceanex schedule shows the current arrangement continuing until the end of February - that is as far as the schedule shows.