The Halifax Port Authority recently advertised for the sale of two boats that it has owned and operated for many years. Although not named in the newspaper ad, they are the J.R.Mitchell built in 1990 and Garret Cotter built in 2004. Both boats were removed from service in the past year or so and are presently stored on dry land on Port property in the south end of Halifax. 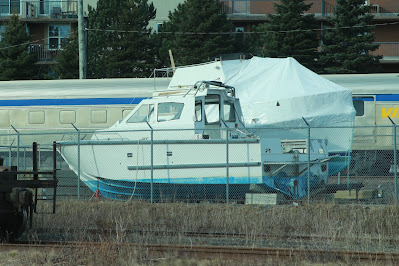 The registrations for both boats have been suspended, suggesting that neither is operational.

The Garret Cotter (visible in the above photo) is a former police patrol boat and J.R.Mitchell (shrink wrapped in the background) was used for port inspection tours. I covered their histories in a post on :  November 25, 2020

The port is allowing an inspection for one hour on March 7 and tenders are due March 10, 2022. The boats are offered in "as is" condition.