The container ship ZIM Vancouver finally entered port yesterday February 21. Although it tied up at PSA Halifax it did so at Pier 36, a part of the Southend container terminal that is not served by container cranes 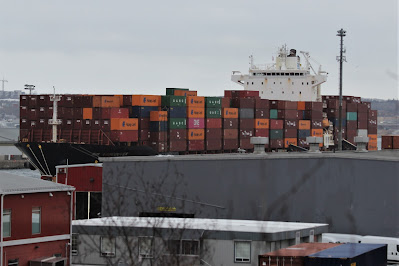 The ship arrived off Halifax February 5 on ZIM's ZCA service from the Mediterranean. Port schedules at that time showed the ship was due February 11, but its actual ETA was February 23. I suspected that the two week delay was due to the ship being quarantined, but there has been no official statement to that effect. 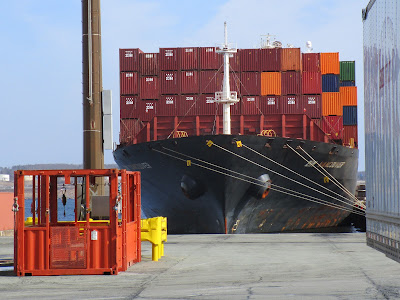 The ship appears to be close to fully loaded with a good variety of ZIM's own containers but also with HAPAG-Lloyd boxes. The ZCA service also operates as HAPAG-Lloyd's AL7 service. Effective December 2019 H-L signed a 1300 TEU per week slot charter agreement with ZIM's ZCA service in return for slots on several H-L services. (Subsequent amendments may have bee made).

For more on the ship see previous post: February 14