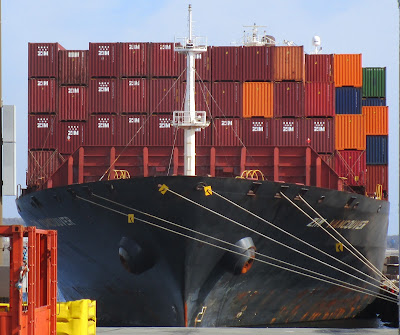 A close inspection of my photo of the Zim Vancouver (posted yesterday) at Pier 36 reveals that the ship has no anchors. A report has reached me that the ship lost both anchors during the gales last Thursday / Friday February 17-18, 2022. The ship was in the outer anchorages off Halifax as the gales, with some very heavy gusts, blew through the area. Gusts of 90.8 km per hour and 103.7 km per hour were recorded at Shearwater and McNabs Island respectively.

The source also reported that new anchors have been dispatched from Houston, by truck.

A sustained period of ship's whistle blowing last night (February 22) at about 2300 hrs AST has not been explained, but acknowleged by authorities as an "ISOLATED INCIDENT". That wonderful phrase loved by obfuscators world wide, neither explains the reason for, nor the source of the sound.

Normally a series of blasts (usually five) is a warning from a ship underway. However there was no ship underway in the harbour at the time. Fifteen or more (I wasn't counting) blasts in quick succession would seem to indicate an emergency of some sort such as a person overboard or a medical issue. Neither of those seems to have been the case.

Due to the direction of the sound relative to my location I believe it came from the ZIM Vancouver.

Could it have been a case of "crew exuberance", a "political statement", or a "malfunction"? We may never know.