Initials, abbreviations and acronyms are much favoured by shipping lines as a way of reducing lengthty company names. Today (February 24) saw the arrival of two ships using intials in their names.

First in was the bulk carrier SLNC Severn en route from Auld's Cove, NS to a US port with a cargo of aggregates. A fairly unusual sight, it is a US flag ship. It was built in 2017 by Samjin Shipbuilding Industries Co in Wehai, China as the Frederike Oldendorff for Oldendorff Carriers of Germany.

SLNC Severn picked up a bit of frozen spray on its trip down the coast from the Strait of Canso over night.

The 33,737 gt, 57,888 dwt bulker carries four 35 tonne cranes and four 12 cubic meter grabs. The cranes can be paired for 70 tonne lifts and the ship can carry containers. (The tops of the grabs are just visible near the bases of the cranes.)

The ship was chartered in 2020 by Schuyler Line Navigation Co LLC of Annapolis, MD, hence the "SLNC" initials. The choice of company name comes from the United States Merchant Marine Academy in Fort Schuyler, the Bronx, NY, where the company principals studied. The ship is still owned by Oldendorff America Ltd (hence the Egon Oldendorff funnel marking).

Schuyler Lines operates a varied fleet of about six ships, some of which were built in the US and qualify for domestic (cabotage) trade under the Jones Act. Others, like SLNC Severn, which was not built in the US, cannot trade between US ports, but still receives some of the benefits of US status.

The ship was here previously, in June and September of last year. Since then the two forward cranes have been repainted in a rust colour.

The next "initial" ship saves a great deal of paint and ink and a mouthful of words by reducing the Mediterranean Shipping Co Ltd to MSC. 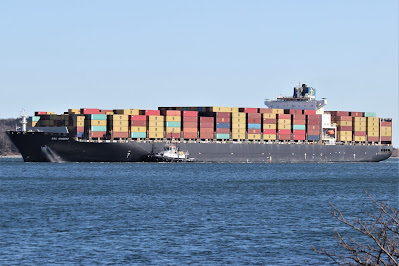 The crew are washing down the anchors as the ship enters port. [See footnote]

MSC Qingdao is making its first port call to Halifax on MSC's Indus 2 service from northern India. A 89,097 gt, 105,162 dwt ship, it dates from 2004 when built by Samsung Koje. It has a capacity of 8063 TEU including 1400 reefers. Originally named OOCL Qingdao it took its present name in 2019 when chartered in by MSC.

Qingdao is a port city located in Shandong province in eastern China. The port handles more than 20 million TEUs per year (!) and is thus perhaps the third busiest port in the world for containers. (Halifax by comparison handled 595,751 TEU in 2021).

The name Qingdao has been used by other containerships, and ZIM Qingdao is a regular caller here. In fact it is due February 26, but it doesn't seem that the two ships will meet in port.

A ship must confirm that its anchors are free and ready for use before receiving clearance to enter the port of Halifax, particularly in winter, in case they are locked in place by frozen spray. On a day like today (minus 5C) it is unlikely that the rushing seawater will freeze, but I question the use of wash water when there is no evidence of frozen spray. Ships often wash down the anchor chain before anchoring to reduce clouds of flying rust as the chain deploys, but that is not the case today, since the ship will not be anchoring. However in an emergency, such as engine failure, the ship must be prepared to drop anchor at once. Perhaps the deck crew were just being cautious.

That brings up the case of the ZIM Vancouver - see yesterday's post - which lost both its anchors during the recent storm. Too much strain on the anchor chain may have resulted in the chain parting. However it is more likely that the two chains became entangled, and the crew had no choice but to let them go since they could not be retrieved. (There are shackles in anchor chain every 15 fathoms, or 90 feet, where the chain can be disonnected.)

In any event it was not safe for the ship to be at sea without anchors (in fact it is considrred to be unseaworthy without anchors.) The ship was given special clearance to enter port as long as it was under the control of tugs and pilot.

It will be interesting to see if any effort is made to recover the anchors. There may be others out there too, and with present day sonar it may be possible to find them if they are worth something.