Fairmile - history to the dumpster 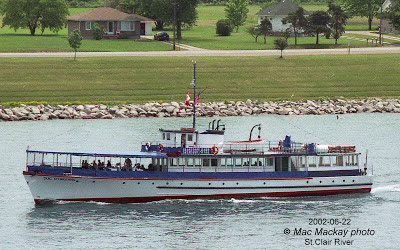 1. In better days, Duc d'Orléans strides up the St.Clair River, eleven years ago to the day.

Sad news via the Boatnerd website. The former RCN Fairmile Q-105, the long serving tour boat Duc d'Orléans, will soon be no more. The organization that took on its restoration has been unable to secure funding and will be forced to scrap the remains of the boat, now on the shore at Sarnia, ON.
Built in 1944 in Sarnia by MacCraft, it was one of 80 Canadian-built Fairmile B class motor launches to serve the RCN during World War II.
I do not need to repeat the history of this craft when we have Marc-André Morin's excellent web site:
http://www.rcnfairmiles.com/category/pennant-numbers-and-converted-fairmiles/q100-to-q109
Suffice it to say that after naval service, mostly in Bermuda, Q105 was sold through the War Assets Corp to the Province of Quebec on October 18, 1945 and in 1948 converted to a tour boat working out of Quebec City. It was renamed Duc d'Orléans for the namesake of Ile d'Orléans downstream of Quebec City, where it was rebuilt, and where it toured. With its sister Roseline, it was a fixture on the Quebec City waterfront for as long as I can remember.
In 1980 it moved home to the Sarnia area where it continued as a tour boat until it was retired in 2006.
The owner then donated it to the Friends of Q105  who started an ambitious restoration, but recently gave up the project. The remains are destined for the dumpster.
As one of the dwindling stock of World War II veteran craft, and one of the few wooden ones,  it would have been a significant artifact had the project succeeded.