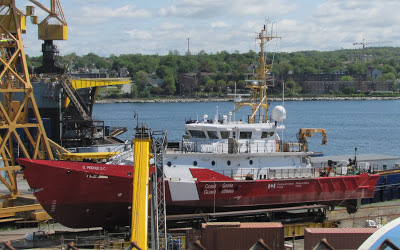 1. G.Peddle S.C. on the launch way this morning.

Halifax Shipyard launched the fifth Hero class coastal patrol boat today. With four more to go, they are now better than half way through the program for the Canadian Coast Guard. Of the boats built so far three are based on the Great Lakes and one in Quebec City.
CCGS G.Peddle S.C. and the sixth boat in the series Corporal McLaren M.M.V. will be based in Halifax.

The seventh boat will go to Quebec City and the last two will patrol the waters of British Columbia.