To say that Imperial Oil is being coy about the ramifications of their announced Dartmouth refinery closure would be an understatement. From CBC News reports, it seems that even the Halifax Port Authority is being kept in the dark about the future of the marine fuel business when the refinery turns off the tap. Vague statements about diesel fuel may fool some of the propel some of the time.


As a full service port, Halifax markets itself to the world as a provider of all the necessities of life for ships. Certainly marine fuel (which is not diesel oil) is a major component of that service, and without it the port will be left in the lurch. Some its current customers may also question the value of calling in Halifax if marine fuel oil is not readily available.
2. The cargo ship Hagen takes on fuel from the bunkering tanker Algoma Dartmouth on June 2, 2013. It is back today for a repeat.

By my unofficial count somewhere between 250 and 300 ships take advantage of that capability each year. These include cruise ships, container ships, cargo ships, the offshore suppliers, gypsum ships and any other ships doing business in the port. But there are also about 50 ships a year that come into Halifax for no other reason than to take fuel. While here, of course, they may also take on supplies and clear customs, but they also pay port dues and contribute to the Port's bottom line. Halifax's strategic location as the nearest mainland port to Europe, makes it a natural as a bunkering port. The tanker Algoma Dartmouth is a dedicated bunkering tanker, kept on standby in Halifax to deliver bunker fuel directly to ships. 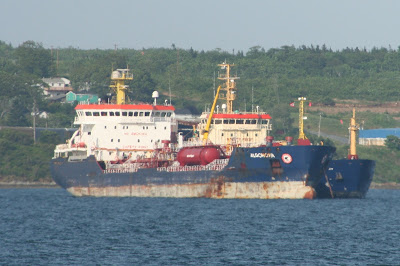 3. Heat haze distorts the coastal tanker Algonova as it takes bunkers yesterday afternoon. The ship had just returned from Sept-Iles, QC where it had delivered cargo from the refinery.

But that's not all. Esso also distributes fuel to other terminals in Atlantic Canada and eastern Quebec, and those coastal tankers also fuel up here. There are currently two such tankers, Algonova and Algoscotia that are in and out of port weekly, and they take fuel almost every trip. If marine fuels are not available at Dartmouth, then it will be a receiving terminal only and will not be a distribution terminal, except by trucks. It will not distribute product to the many of the Esso and Irving Oil depots in eastern Canada, as it does now, but will instead only service mainland Nova Scotia needs. 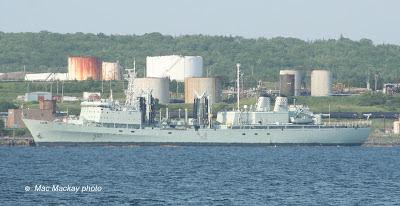 4. HMCS Preserver takes fuel yesterday afternoon. As a supply ship, one of its roles is to refuel other ships at sea. Navy ships have priority berthing at Imperial Oil for national security reasons, and are large users of marine fuel.

But that's still not all, the Royal Canadian Navy and the Canadian Coast Guard also depend on the refinery for fuel.Without the refinery producing the various grades of marine fuels that they need, they may be forced to spend millions on building their own refueling terminal, bringing in fuel from who knows where.
So it's not just about jobs lost (that's bad enough), but it is also about how the Port of Halifax can serve its customers, and how the RCN and CCG can keep their fleet going economically and without delays.

5. Algoma Dartmouth heads to BIO to refuel CCGS Hudson, one of six large ships based there.

So why blame Esso? As one of the largest, if not the largest oil company in the world, parent Exxon should answer for why the refinery has not kept pace over the years. Such small players (by world standards) as Irving Oil took the bull by the horns, expanded and upgraded well beyond absolute necessity and found a market in the US. They are also importing oil, by train, from North Dakota, which Imperial is not doing. Exxon/Esso/Imperial needs to explain why they have not kept up. With Newfoundland oil available right in front of their eyes, one would think that they could have seen an opportunity and acted on it instead of taking only the odd cargo now and then..

6. The Canadian shuttle tanker Kometik delivers a rare cargo of Canadian crude oil at Dartmouth on Saturday. With Newfoundland oil nearby, the refinery still imports oil from overseas.

We (the taxpayers and our government) have also been guilty in not reminding Esso that the refinery was set up during World War I as a strategic asset, with heavy government contributions (and patronage- viz. the Navy and coast Guard.) and that the tax breaks and subsidies for exploration that Esso has received  should come with a price- i.e. re-invest.  I wonder if Esso is really in the oil business or in the oil exploration business. Certainly their shareholders are not complaining, so if the refining business isn't making money, they are making money somewhere.

As to trying to make a business case to Esso to keep the refinery open, that may be a lost argument now. I haven't heard much of an outcry from our politicians at any level - maybe they've been distracted. But it is time they stepped up to the plate and became involved in a solution to this important issue for the Port of Halifax.