George's Island light - enjoy it while you can 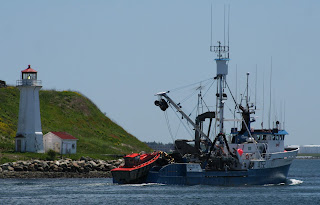 The federal government long ago signaled its intention to divest itself of lighthouses in favour of less costly aids to navigation, which require little or no maintenance. The lighthouses are being offered to communities and community groups but they are finding few takers.
The Halifax Regional Municipality has eighteen (yes 18) lighthouses, some of particular significance. Sambro Island light, which is not well known because it is remote, is the oldest one in use on the east coast of Canada.The need for a light there was recognized soon after the founding of Halifax, and a temporary beacon was maintained until the lighthouse was built in 1758. The need to preserve this particular light station should be obvious.
Less significant but much more visible is the quaint little tower on George's Island. A light on the island was first established in 1876, and the present structure was built in 1919. It is also on the list and so far has had no takers. Parks Canada is responsible for George's Island and has no funds to maintain or preserve the lighthouse and so its days may well be numbered.
Two other lighthouses are visible from George's Island . At Maugher's Beach there has been a structure since 1828, and the present lighthouse dates from 1941. The Chebucto Head light, which was first established in 1872, dominates the headland at the entrance to Halifax harbour.
All are up for grabs, and the Halifax Regional Municipality is being asked for a plan of action to save some of the lights.
Recommended reading: The Sea Road to Halifax Published in 1980 by the Maritime Museum of the Atlantic.
Posted by Mac at 9:39 PM