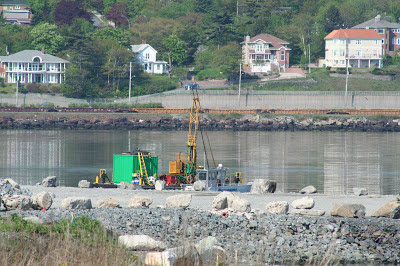 A tender ad published on June 12 announced another major construction project for the Port of Halifax. With completion of the extension to the Halterm container terminal in the south end of the port, it is now time for an extension to the Fairview Cove container terminal in Bedford Basin. The tender is for  dredging and concrete crib- the same kind of construction used in the ongoing Pier 9 C extension. 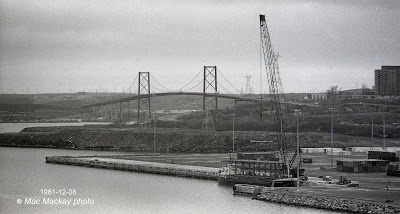 2. When Fairview Cove opened there were no fixed cranes, only one mobile- and lots of empty space.

The Fairview Cove terminal, the port of Halifax's second container pier, was first opened for business in 1981 and has been extended twice since. With the introduction of larger cranes in 2007 the pier is capable of handling the current crop of post-Panamax ships. However as the size and number of larger ships is expected to increase, the need to accommodate two post-Panamax ships at the same time has become necessary. The extension to the Fairview Cove terminal will allow this. It also likely that more large cranes will be needed too. The recent arrival of larger ships, which could just barely berth under the current smaller cranes points to that need, but no announcement has been made yet. 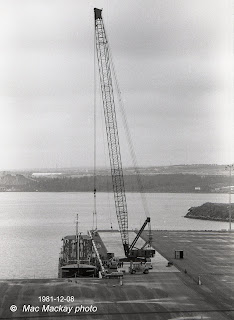 3. Parts for the first crane were brought in by J.A.Z. Desgagnés in December 1981.

For the past many months fill has been accumulating at Fairview, most of it from the excavation for the new World Trade Centre. Last week Connors Diving had a core drill working at Fairview a sure indication that something was going to happen. 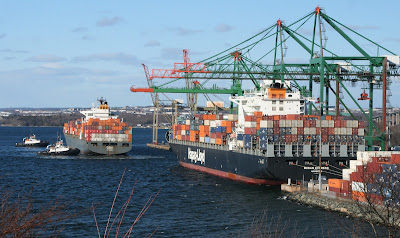 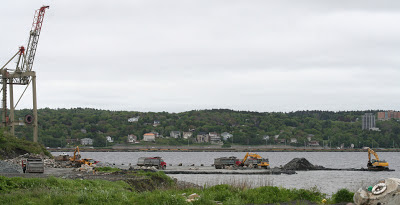 5. Fill operations continue today.
Posted by Mac at 9:22 AM