Canadian Coast Guard, more news as the NSPS continues to roll out

There was another announcement on Wednesday regarding shipbuilding as part of the massive replacement/ modernization of Canada's government fleet.

First it was the combatant (Halifax Shipyard) and non-combatant (Seaspan Shipyard) ships, announced last year as part of the NSPS (National Ship Procurement Strategy) both of which will inject major money into the economy for a long time to come. The government finally woke up to the fact that shipyard's are good for the economy, and became willing to build not just ships, but a whole shipbuilding industry. How that will work out in the long term remains to be seen, but it cannot be denied that we will get a whole bunch of new ships for the navy and Coast Guard, and a vastly upgraded shipbuilding industry. Whether it will pay back a return on the government's investment is a moot point, since it is so far beyond any one government's normal planning process. It is a kind of Keynesian attitude of leaving it to future generations to worry about.
Irving Shipbuilding's Halifax yard is a beehive of activity already, where it is expanding northward to build the bigger ships. 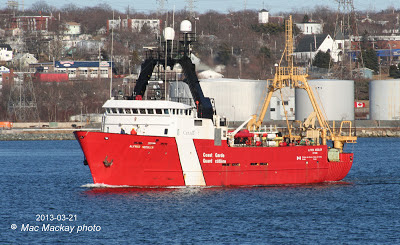 The research ship CCGS Alfred Needler is one of the ships to be replaced under the larger NSPS announcement. The new ship will be built in Vancouver.

Second was the announcement in February that $360 mn will be put into 18  Coast Guard ships to upgrade them and give then life extensions. This includes the four heavy icebreakers (Amundesn is already done now.  Because of engine failures last year it had a major rebuild at St.Catharines over the winter.) 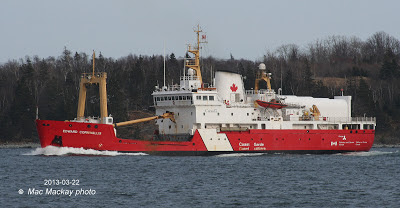 CCGS Edward Cornwallis is one of the six multi-tasked vessels to get a life extension.

Six multi-tasked vessels, (3 based here), one medium endurance (based here) one science, two offshore patrol, two special navaids and two air cushions will also be upgraded over the next ten years - none too soon for some of them. There may be no NSPS restrictions on which yard can bid on this work. 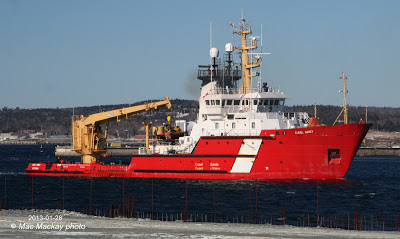 CCGS Early Grey is the medium endurance ship that will get a life extension/upgrade.

Wednesday's announcement of $488 mn for Coast Guard small ships and craft, under 1,000 tonnes, which will not be built by Irving or Seaspan (that was also part of NSPS) will see 18 to 21 new boats added in the next seven years. These would not be good fits for the big yards anyway, and it was NSPS  strategy to give some boatbuilding yards and some smaller shipyards some needed business too.

Still to come are new tugs for the navy, both large and small. We are sure to get that announcement fairly soon as the summer spending continues. 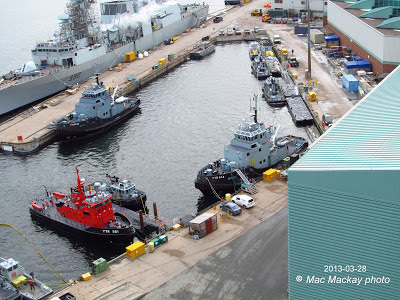 The navy will be replacing all its tugs (large and small) and its fireboats.

Meanwhile there are some puzzles. Such as CCGS Matthew which has not re-entered service this year after its winter layup. The survey ship has not been mentioned in any announcements, so presumably it is idled by lack of funds.Built in 1991 it is one of the newest ships in the CCG/DFO and and uniquely a hydrographic ship - it doesn't seem to perform any other function, and recent government cuts may be to blame. 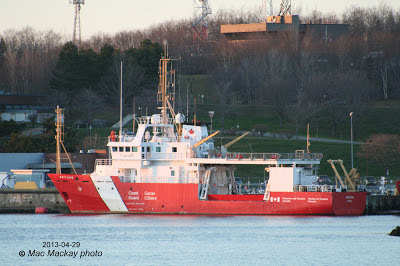 A forlorn CCGS Matthew sits alongside BIO- not in service this summer. That is Halifax Traffic VTS station on the hill behind.