1. The provincial flag of Prince Edward Island and the house flag of Northumberland Ferries Ltd.

An announcement from Ottawa that some $13mn will  be spent on the Caribou, NS - Wood Island, PE ferry operation will upgrade terminals at both ends and will - get ready for this - re-engine the ferry Holiday Island. Such a major expenditure can only mean that the Minister of Transport expects to get many more years of service out of the veteran ferry, thus of course no replacement in the offing.
Two things will immediately come to mind, one: what are they thinking in Ottawa pumping that kind of money intro a 42 year old ship and two: since they can get more years out of the old 'Island, there will be no money put aside to replace the equally old Princess of Acadia any time soon.
Both ships were built in 1971, but Princess of Acadia has had more severe service, running year round in less friendly seas. A refit in the US refit last winter saw some big bucks put into maintenance and cosmetic upgrades, so it seems unlikely that a replacement is in the offing there either. [Keep up to date with our friend Bayferryman - link to his blog under My Faves.] 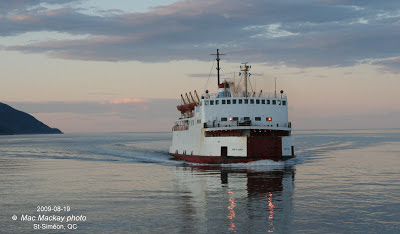 2. Trans-St-Laurent is fifty this year.

Speaking of old ferries, one that I use several times a year is Trans St-Laurent which runs between Rivière-du-Loup and St-Siméon, QC. Although I don't know if there will be any particular celebration, that ship is 50 years old this year and shows no sign of imminent replacement either.

Holiday Island is one of a pair of sisters, built by Port Weller Dry Dock in St.Catharines, ON and launched as William Pope and Thomas Haviland. Although named for two Fathers of Confederation from Prince Edward Island, someone thought that the names were a tad sober for boats that were to transport gleeful tourists to Prince Edward Island, so they were very quickly re-dubbed Holiday Island and Vacationland respectively. [Nobody seemed to sympathize with the impoverished returnees, who would be paying the bills all winter.]
Their original run was between Cape Tormentine, NB and Borden PE, and they operated seasonally, for the Minister of Transport, with the Canadian National Railroad as managers. CNR formed CN Marine and eventually spun off Marine Atlantic as an independent crown corporation to do the actual operating.


3. Holiday Island looked particularly good in Marine Atlantic's colour scheme. In this photo she is in her last year of operation on the Borden-Tormentine run.


When the Confederation Bridge was completed in 1997, the ships were laid up and Holiday Island transferred to the remaining PEI ferry service, operated by Northumberland Ferries Ltd. Vacationland  remained laid up in Sydney harbour despite a plan to have it run to Grand Manan Island, wherein it was renamed Fundy Paradise in 2001. Ownership was actually transferred to the New Brunswick Minister of Transport, but the ship was manifestly unsuited for that service, so was eventually sold in 2009 to Entreprise Marissa Inc of Quebec City. Their plan to use it as a dredge (it would be a giant pumping station for suction dredging) fell through when the Minster of Public Works insisted on a self-dumping hopper dredge for the work. Stuck with no work, it has languished alongside, mostly in Wolfe's Cove in Quebec City ever since.

4. Under NFL management Holiday Island reverted to its original white paint, but with a red stripe. Here she approaches the Caribou terminal with great precision. She flies the Province of Nova Scotia flag on the "Nova Scotia end" of the ship. As a double ender, her bow and stern are essentially identical.

Holiday Island however has soldiered on, still seasonally, but in fact is the primary ferry running between Caribou and Wood Islands. Fleet mate Confederation is mainly used in the busiest parts of the summer.
Holiday Island is powered by two English Electric (Ruston + Hornsby Division) main engines of 3,625 bhp each, and each geared to a Voith-Schneider "propellor" one forward and one aft. These vertical blade units, by changing pitch on the blades, provide omnidirectional control without additional bow and stern thrusters. Both units run all the time, one in forward pitch and one in reverse pitch, giving a speed of 11.5 knots.It is worth seeing the ship come into its dock - the degree of control is incredibly precise.
The old Ruston engines must be nearly clapped out by now - they aren't noted for their longevity, and knowledgeable Ruston engineers are getting thin on the ground. The new engines will be vastly more efficient and more ecologically friendly too. I haven't heard any suggestion that they will be dual fuel LNG/ diesel or diesel/electric, but just as a suggestion: why not re-power with a system that can be removed and re-used in a new ferry in five years or so?