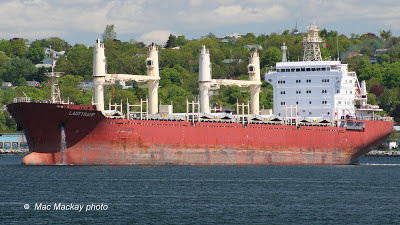 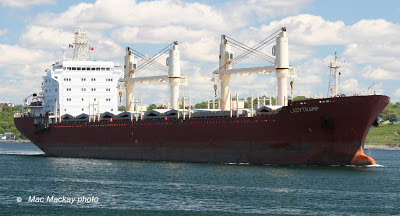 It was a fairly routine departure - pilot boarding at the scheduled time of 11:30, weighing anchor smartly and taking advantage of a nice breeze to bring the ship around to head out west of George's Island. Then off pier 20 the ship emitted a great gout of black smoke marring the entire operation. 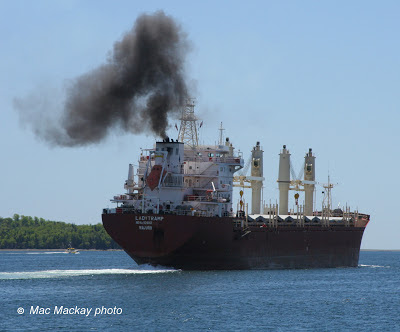 Is it any wonder that low emission regulations are becoming stiffer all the time. Too late for this guy.
The ship was built in 2001 by Wuhu Shipyard in Wuhu, China, as the bulk carrier Cedar and in 2003 became Atlantic Castle. It adopted its present name in 2007 and was reclassified as a general cargo ship in 2008. I assume that means the cranes were installed on that date to allow the ship more flexibility in cargoes.
It flies the flag of the Marshal Islands but is owned by Korkyra Shipping Ltd of Korcula, Croatia.
It measures 16,807 gross tons, 24,765 deadweight tonnes.