There was just time this morning to take a few quick photos before the snow strarted. 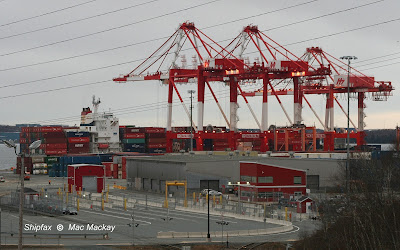 At pier 41 CMA CGM Lavender had rapidly filled its decks, and probably holds too, with CMA CGM and Hamburg-Süd containers left here by HH Emilia.


Rounding Sandwich Point, CSCL Oceania was heading for pier 42. Within minutes of this photo, visibility was reduced dramatically by the arrival of the season's first snow. 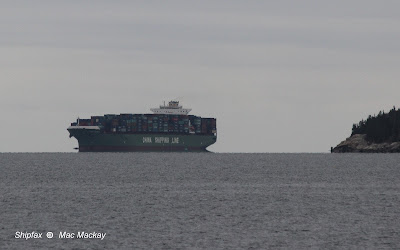 A common sea level optical phenomenon (an inferior mirage) appears to show the ship's reflection, but of course that is impossible, since the sea surface is not a mirror in this case.  It is really light rays refracted by colder air sweeping over the warmer sea, and is similar to those non-existant puddles "seen" in paved roads in the heat of summer.

CSCL Oceania flies the Hong Kong flag, but is owned by Seaspan Corp (based in Vancouver) and chartered to China Container Shipping Lines. It was built in 2004 by Samsung, Koje, and measures 90,645 grt, 101,810 dwt, with a capacity of 8468 TEU, including 700 reefers.

In 2007 the ship was renamed MSC Belgium. It then returned to its original name in 2009 and is now part of the CMA CGM / CSCL / UASC Columbus Loop service. 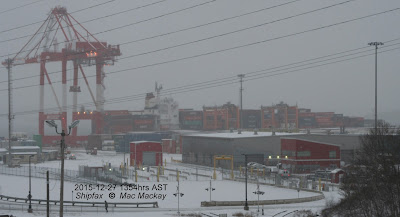 By early afternoon, work was completed  on  CGM Lavender . It is due to sail later today for Tilbury, UK.
Two of the cranes had moved down to pier 42 to work on CSCL Oceania. By this time the snow had changed to ice pellets.