The latest Freedom class Littoral combat ship of the United States Navy arrived in Halifax late yesterday afternoon. It anchored in the lower harbour and early this afternoon moved in to HMC Dockyard for the weekend.

USS Milwaukee LCS 5 was built by Marinette Marine in Wisconsin. Its keel was laid October 27, 2011 and it was launched December 18, 2013. After commissioning in Milwaukee November 21, 2015 it made its way down the Great Lakes stopping in Detroit for the US Thanksgiving weekend. The tug Océan Ross Gaudreault met the ship in Lake Erie and escorted it down through the Seaway to Montreal. (The first ship in the series, USS Freedom got banged up a bit when it locked through the Seaway in 2008.) 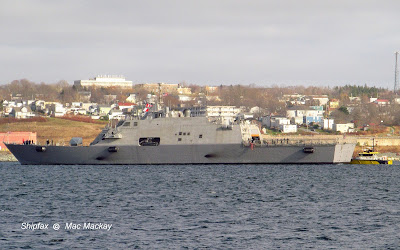 The pilot boat stood by the ship for some time as it struggled to get underway, and to get the tug Atlantic Willow secured in gusty winds.

From that first ship, and the second, USS Fort Worth, fine tuning and trials have turned up scores of changes and improvements in the design and construction, but according to Lockheed the design has now been "locked in ".

We could expect a similar process with Canada's new frigate replacements, so even cost estimates that are outdated now need to allow for lot of unknowns.

The ship will remain in Halifax until Monday when it will sail with an eventual destination of its base in San Diego.