Hapag-Lloyd picked a good name for the ship Chicago Express, at least as far as Halifax is concerned. Much of the import traffic over Halifax's container piers heads for the mid-west USA, thus giving that landlocked, but densely populated region, access to seaborne trade. The traffic goes by rail, and like roads leading to Rome, all rails seem to lead through Chicago. 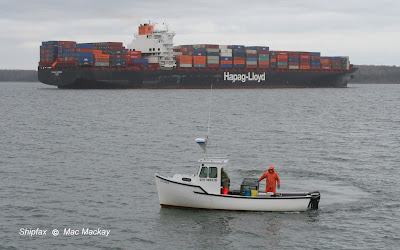 
Chicago Express was a big deal when it was built in 2006 by Hyundai, Ulsan, as one of the eight ship Colombo Express class, which at the time were considered to be very big. Its 93,811 grt and 103,691 dwt and 8,749 TEU (including 730 reefers) made it too big for the Panama Canal, but it now ranks as mid-size after the proliferation of giants built by other lines, and by this time next year will likely be able to glide through the big(ger) ditch with ease.

What it will be carrying next year will be a different story, as today's mix of boxes include many APL cans. Since APL now belongs to CMA CGM, a competitor of H-L, it will be leaving the G6 Alliance.
CMA CGM will retain APL as a stand alone brand, as the former American President Line has a long transpacific history - and some Canadian history too.

Robert Dollar, born in Scotland, and raised in Canada, purchased a number ships in 1923, all named for US Presidents, and Dollar Line named all its subsequent ships in the same way. Dollar took over Pacific Mail Line in 1925. It was founded as a New York based clipper ship operator in 1848, and built some of the most famous extreme clippers such as Rainbow and Sea Witch.
The name American President Line as the formal name for the company did not occur until Dollar Line failed during the Great Depression and was taken over by the United States government in 1938. Follwiong World War II the company was privatized again and in 1997 was taken over by NOL.

If you want more detail here is a good account here:

Aquamarine Ace made its departure from Halifax this afternoon after an overnight visit at Autoport. The 2008 built ship is a product of Mitsubishi Heavy in Kobe, measuring 60,143 grt, 18,772 dwt and has a capacity of 6400 cars.

Operators Mitsui OSK Lines (MOL) has a large fleet of Pure Car and Truck Carriers, and here's the list: MOL auto fleet
The ship and a number of its fleet mates are registered in the Cayman Islands, which now seems to be attracting autocarriers and other high grade ships to its flag.