Like yesterday harbour activity was mostly containers and cars. This time I caught two inbound ships:

Green Dale arrived late morning and headed directly to Autoport. It is owned in the United States by International Shipholding Corp of Mobile, AB.It was built in 1990 by Kanasashi Shipbuilding of Toyohashi, Japan as Altair Leader, but took its current name later the same year. It first sailed for the Waterman Steamship Corp, a venerable US shipping line, but moved to Waterman's international operation in 2013 without change of name, but was reflagged to the Marshal Islands. Its tonnages are 50,087 grt, 16,894 dwt, and can carry 5,170 cars.

CMA CGM Almaviva arrived mid-day but had to wait for a tug, and for the smaller ship Reykjafoss to complete its work at pier 42. I suspect that there are equipment issues at Halterm, since many of the recent callers have been taking a longer time than usual to work their cargo, and they have not been using pier 36 for smaller ships. 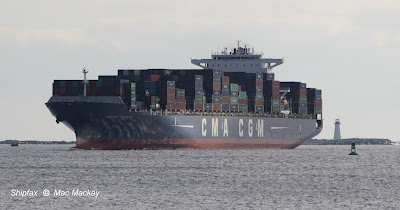 The ship is another of the typical CMA CGM ships on the Columbus Loop service, and measures 96,817 grt, 109,000 dwt, with a capacity of 8465 TEU.  It was built in 2011 by Samsung Shipbuilding and Heavy Engineering, Koje, South Korea. It sails under French offshore registry, and carries an international crew.