Finally a break in the weather - which has been stormy, rainy or just plain dark for the better part of the week and most ship movements have been taking place early in the morning or late in the afternoon.

Today's first time caller was CMA CGM Cendrillon on the Columbus Loop service. As with all the ships in this rotation its name is associated with French musical theater. Cendrillon (Cinderella) is the subject of numerous tales in many languages and several operas, notably that by Jules Massenet. 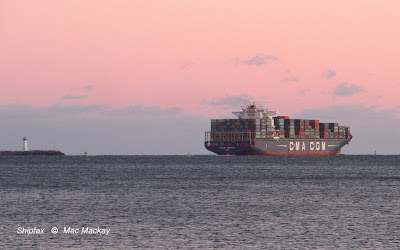 CMA CGM Cendrillon was built in 2009 by Samsung Shipbuilding and Heavy Industry, Koje, South Korea. Its capacity is 8465 TEU including 700 reefers and it measures 90,931 grt, 109,021 dwt. Although owned by a French copmany flies the British flag.

Cendrillon or Cinderalla is a more fanciful name than most, but it has also been associated with Halifax before, since it was carried by a second generation Atlantic Container Line ship. 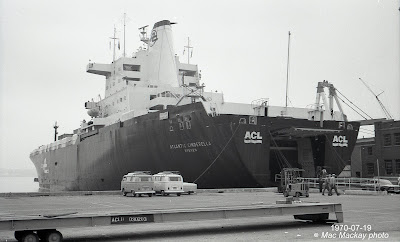 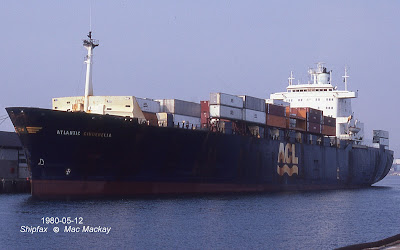 Atlantic Cinderella was built in 1970 by Ateleier et Chantier de Dunkerque et Bordeaux (France-Gironde) in Dunkirk, France. At 15,437 grt, 18,154 dwt, and with a capacity of 738 TEU it would be a pipsqueak by today's standards, but was a big and impressive ship at the time. Its massive Stal Laval propulsion system consisted of four steam turbines producing 35,000 shaft horsepower for 24 knots.

The ship's owner was Wallenius Rederierna of Sweden, one of the original ACL partners, which still names its ships after operatic characters.

After less than 15 years in service it was laid up in Jacksonville FL in December 1984, and was towed to Kaohsiung, Taiwan, arriving January 19, 1986 for breaking up.