It was a busy day in the harbour to make up for the Christmas Day holiday when there was almost no activity. Longshoremen do not work on Christmas Day, so there were idle ships waiting to work cargo.

The big bulker Xin Hong arrived on Christmas Eve and tied up at pier 28. It loaded soybeans in Sorel, QC, to maximum allowable draft on that portion of the the St.Lawrence River, and will top off here. 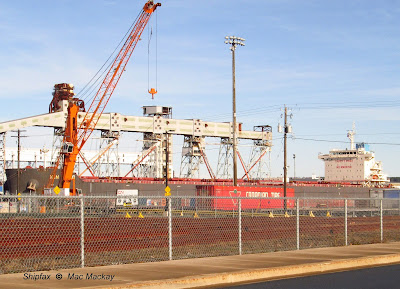 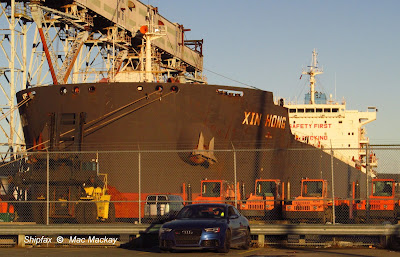 Xin Hong is a product of the Dalian #2 shipyard in China and  measures 44,5453 grt, 82,226 dwt. Owned by FEH Shipping of the Cayman Islands, it is managed by Global Marine Ship Management of Qingdao and flies the flag of Hong Kong. It remained idle on December 26, also a holiday in Halifax, which means that longshoremen get paid overtime.

Two other ships in port on Christmas Day were Kobe Express [see below] and Dinkeldiep, the St-Pierre et Miquelon feeder ship. The latter's Ukrainian crew have spent Christmas in Halifax for many years.

There was also an early morning sailing from Imperial Oil on Christmas Day. Zambezi Star arrived on December 21 and was originally due to sail December 24, but likely remained in port due to very high winds on Christmas Eve.

Among the few vessels moving in Halifax harbour on Christmas Day was the tour boat Haligonian III. It was on what would be called a re-positioning cruise if it had been carrying any passengers. There was no one aboard however, except the crew - and a small one at that - as the boat moved from its summer berth at the Cable Wharf to Bedford Basin where it joined its fleet mates in winter layup. 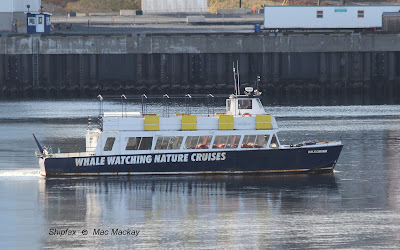 Haligonian III has been a fixture in Halifax harbour since 1972 when it was built at Wheatley, ON by Hike Metal Products Ltd..
And why is it named Haligonian with a three?  There actually were Haligonians I and II, which were replaced when this boat was delivered.  They were wooden vessel, built on the lines of fishing boats. I caught Haligonian II in spring refit in Sambro in April 1970: 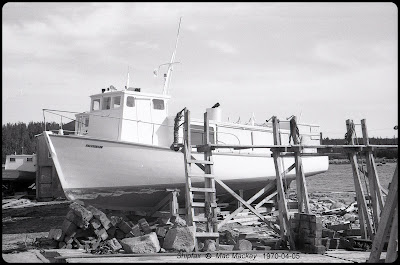 Built in 1968 by Deschamp + Jackson in Shelburne, NS, it was sold to owners in the Gaspé and is still in operation taking tourists to Percé rock. It was extensively rebuilt in 1997, but looks very much the same and surprisingly still carries its original name. 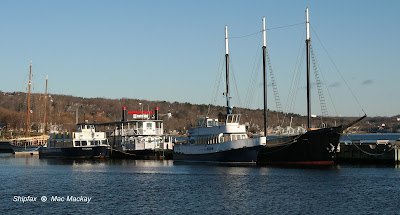 Mar (background) Haligonian III, Harbour Queen I, Summer Bay and Silva of Halifax at their winter quarters in Mill Cove, Bedford. Missing from this grouping is Theodore Too.

In recent years these boats have wintered at Alderney Landing in Dartmouth or at the Cable Wharf, so this is a new arrangement for them. The entire fleet and related business including Murphy's restaurant and gift ship was acquired during 2014 by Ambassatours, owners of a fleet of doubledecker and other tour buses and the Harbour Hoppers.


Both container piers were busy today, with two arrivals each. At Fairview Cove, the first in was OOCL Kuala Lumpur, a ship I have never photographed before, although it called in Halifax first July 30, 2012. 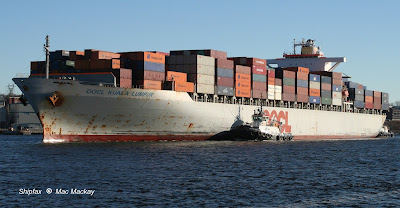 Kuala Lumpur Express strides up the Narrows and into a brisk northerly wind with Atlantic Larch forward and Atlantic Oak as stern tethered escort.

The ship was built by Koyo Dockyard Co in Mihara, Japan in 2007 for Nissen Kaiun Co and has been chartered to OOCL ever since. In 2012 it was sold to Grace Ocean Investment of Kowloon, Taiwan and reflagged from Hong Kong to Singapore. It measures 66,462 grt, 66,940 dwt and has a capacity of 5888 TEU including 586 reefers.

As the ship nears the A.Murray MacKay bridge the tug Atlantic Willow comes alongside. As soon as the ship clears the bridge, Atlantic Oak will cast off and return to the lower harbour for the next ship. Atlantic Larch and Atlantic Willow will berth the ship at Fairveiw Cove west, under the big cranes.

Atlantic Oak has control of  Oakland Express as it takes a broader turn around the knuckle at Pier 9-9A. It will go out into Bedford Basin to await its berth at Fairview Cove east - occupied by fleet mate Kobe Express.

By coincidence the ship was built as Kuala Lumpur Express in 2000 by Hyundai Mipo. Built for Costamare Shipping Co of Greece it has been on charter to Hapag-Lloyd ever since. It was renamed in 2008 to free up the name for a larger ship. In 2013 Costamare shifted its operation to a Chinese subsidiary and reflagged the ship from Greece to Hong Kong. It has been a regular caller in Halifax under both names.

Another regular caller in Halifax, Kobe Express arrived on the morning of December 24. It got about a half day's work then and finished up with a half day today sitting idle on Christmas Day.  It dates from 1998 when it was produced by Samsung, Koje as Shanghai Express. It rates 4612 TEU , including 350 reefers, carried by 52,523 grt, 67,058 dwt. The ship has always been owned by Hapag-Lloyd directly and received its current name in 2002 when a larger ship rated the Shanghai name. 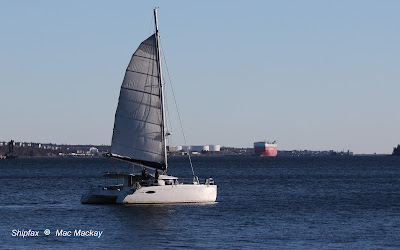 Not to be outdone by commercial shipping, the sailing catamaran Butterflies are Free took a leisurely Boxing Day cruise around the harbour. In the background Wilhelmsen's Toledo unloads at Autoport. It later moved to Pier 31 to unload before sailing for New York.

Although identified as Butterflies are Free (US flag) on AIS, I believe this boat to be Pride MMXVI  A Dufour 44' built in 2014 and registered in Halifax on November 10. Perhaps it is time the owners reset the AIS. 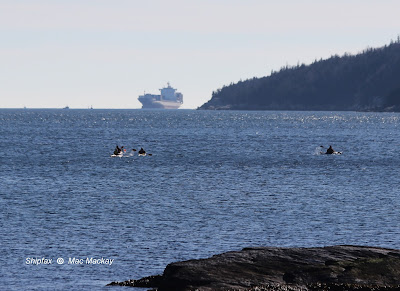 Also getting in a last cruise, several kayakers round Point Pleasant Park as the next inbound arrives.

That inbound was due for Halterm where an early arrival was the regular Maerk Pembroke in from Montreal on the transatlantic Maersk - CMA CGM service. 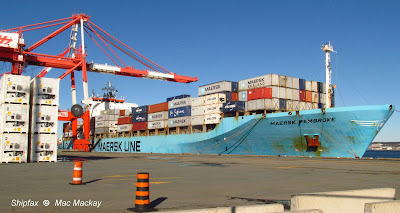 It had no operational bow thruster on arrival, but it may have been fixed by the time the ship sailed.


The next arrival was another CMA CGM ship far from its usual run. 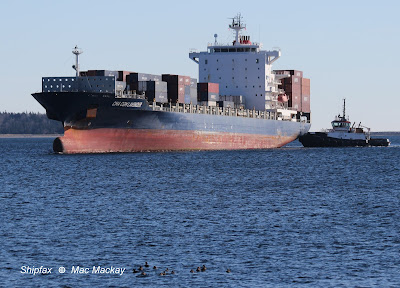 A group of eider ducks, recently arrived for the winter, seems undisturbed by the arrival of a ship.


CMA CGM Lavender is one of seven ships on the Panama Direct Line, operated by CMA CGM, ANL and Marfret. [ANL is the former Australian National Line, now part of CMA CGM. Marfet (Marseille-Fret) is an independent, serving the Mediterranean, Caribbean and South Pacific.] 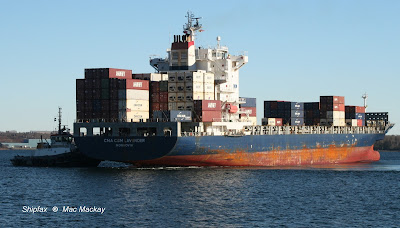 This is the first time I have seen Marfret containers in Halifax, but they are not likely to be unloaded here. Instead, I conjecture that the the ship will take on some of the containers left by HH Emilie and forward them on to another shipping hub, such as Kingston. 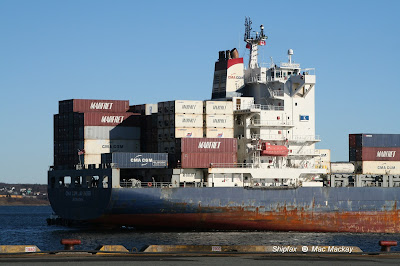 There was also a ship for Imperial Oil today. The colourful Inyala arrived mid-afternoon. 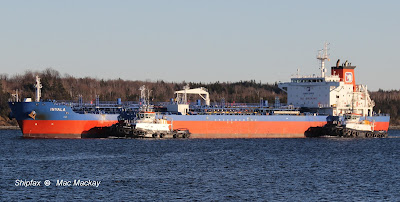 Another smaller handysize tanker of 25,400 grt, 40,037 dwt, it was built by SLS Shipbuilding Co, Tongyeong, South Korea in 2008 for Unicorn Shipping of Durban, part of Grindrod Shipping. 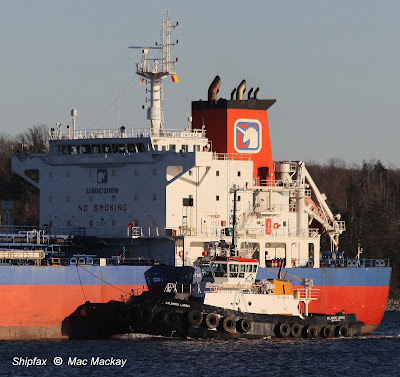 The Unicorn motif appears on the funnel and the bridge front, but the Inyala is a South African antelope with two horns, as far as I can tell..