HH Emilia - not a stranger

The container ship HH Emilia arrived this morning with engine trouble. Far off its normal route, it is coming to Halifax as a convenient place to unload all 2,000 or so containers for another ship to pick up. Repairs will apparently take some time, or such a measure would not normally be taken. 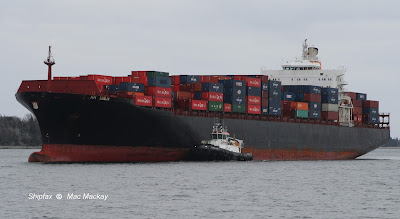 The ship is part of the Vespucci Service, a new service run by CMA CGM with partners Hamburg Sud and United Arab Shipping Corp. Starting in March of this year it is a North Asia, US East Coast service via Panama. The port rotation is Qindao - Ningbo - Shanghai -(Panama)- Cartagena - Savannah - Charleston - Norfolk - New York - Norfolk - Charleston  - Savannah - Qingdao. 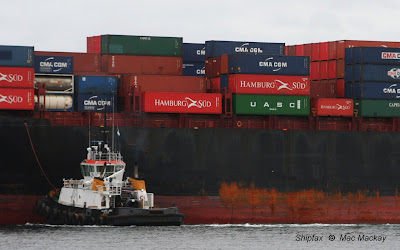 CMA CGM, Hamburg-Sud and USAC are partners in the Vespucci service.

HH Emilia's last port was New York, so it is apparent that none of the subsequent ports offer suitable offloading facilities. 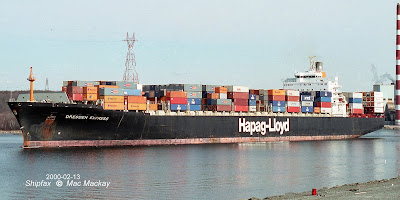 Dresden Express on its first call in Halifax.

Its first call in Halifax was February 13, 2000. In March of this year it was sold by Hapag-Lloyd to Konig + Cie GmbH+Co KG of Hamburg. It was renamed with some haste to take up service on the Vespucci run, and reflagged to from Bermuda to Liberia. Even the old H-L funnel was retained, with the H-L obscured by some not very well matched paint. 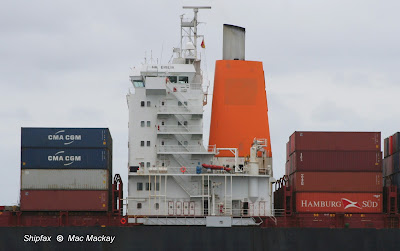 My guess is that if the engine repairs are deemed serious enough the ship may go to scrap.In any event it is apparently going off charter to make way for another ship. 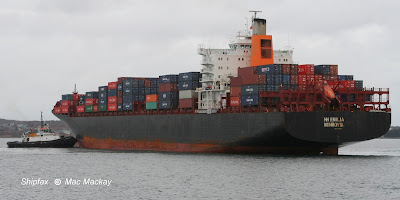