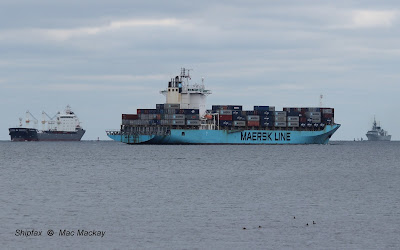 MarBacan makes its way inbound as Maersk Penang takes the western channel to give it room. HMCS Halifax follows inbound for a quick turn around.


The bulk carrier MarBacan* tied up at pier 28 this afternoon to top up its cargo. The ship entered the St.Lawrence Seaway on November 10 and unloaded cargo at Toledo, OH and Marinette, WI, and on November 24 arrived in Goderich, ON where it loaded grain to Seaway maximum draft.
It sailed November 28 and made its way back down through the Seaway, exiting at Montreal December 2.

With tugs made fast, Marbacan continues in. Just above the bow tug, the ship exhibits some frozen spray - the first sighting of that commodity this season.

MarBacan now flies the flag of Portuguese Madeira for owners MarConsult Schiffahrts of Hamburg. However until March of this year it was named Fritz under Liberian registry and ran for Intersee Schiffahrtsges, also of Germany. The ship was built in 2010 by Wuhu Xinlian, Wuhu (Sanshin), China. It measures 20,491 grt, 29,618 dwt and carries three 30 tonne deck cranes. 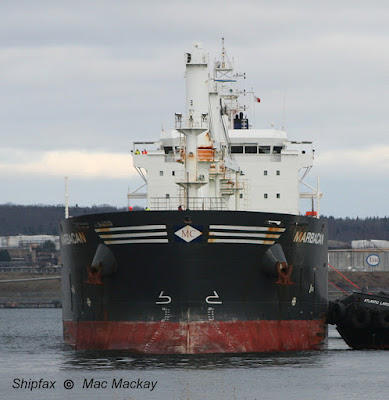 Owners MarConsult display their initials on the bow.

* Bacan is an island group in Indonesia: https://en.wikipedia.org/wiki/Bacan_islands
.
Posted by Mac at 7:40 PM