A little Christmas Holiday nostalgia from the old shoebox from 1979. If we think the Christmas season of 2015 was a busy one for Halifax, it was nothing like Christmas week of 1979. Christmas fell on a Tuesday that year, but the harbour business continued virtually unabated.

Friday December 21 [9 arrivals, 4 departures]* (from my records only - not official) 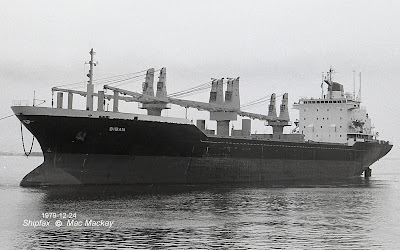 The French tug Abeille 30 towed in the disabled Biban. The 1977 product of Marine Industries in Sorel, QC for the Algerian state shipping company, it had a main engine break down in Duluth MN in June. It was towed down through the Great Lakes to Montreal where Abeille 30 took over, sailing December 11. Biban went into drydock December 24. The pair laid over in Halifax until January 1, 1980 when they left for Europe. The ship lasted until 2003 when it was scrapped in Alang, India.

At Halifax Shipyard, the veteran ore carrier Dapo Star was getting the final touches after drydocking. 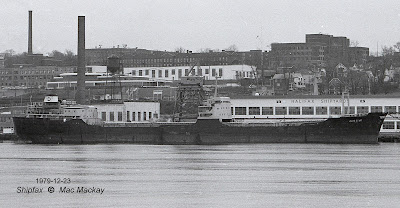 The Machine Shop Wharf is still recognizable at Halifax Shipyard, but much else has changed.

The ship was still alongside into January 1980.
Built in 1959 as Queensgarth by Blyth DD + SB Co of Cowpen Quay, the 10,762 grt, 15,386 dwt ship was built  with an island bridge just forward of midships, straddling the sliding hatch covers. In 1977 it was sold to Greek owners and renamed Dapo Star and continued trading as an ore carrier until 1981 when it was converted to a drill ship. This rebuild extended the ship's life to 1992, having been renamed successively Australind, Eniwetok, Five Star and Star Drill, before it was broken up in Alang.


Saturday December 22  [3 arrivals, 5 departures]
Among the arrivals was Arc Minos, for pier 9C where it loaded lumber on deck.

The background has seen major changes. CN's intermodal terminal occupies the lower level and the oil tank farm has expanded. There are also more sheds on the pier face.


The ship returned to Halifax in March-April 1989 with ice damage to its rudder and again in 1990, but as Clipper Pacific with engine trouble. It eventually suffered an engine failure in 2010 and was scrapped in Aliaga in March 2011. The ship was built at Neptun VEB, Rostock, East Germany and was a typical small general cargo ship at 5999grt, 7923 dwt. It carried nine different names in its career.

The sleek reefer Itassucé sailed from Pier 9B.

Christmas Day 2015 shows Cape Roger at pier 9A and Atlantic Condor at the new pier 9C with a vacant  pier 9B between. 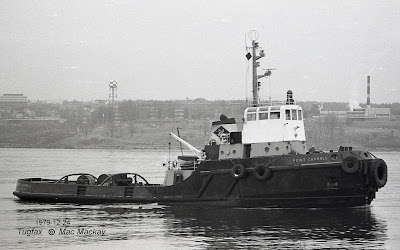 Biban entered drydock, assisted by the seagoing Point Carroll which usually did not do harbour work The tug has worked for McKeil Marine as Tony MacKay since 2001, but has been laid up in Hamilton, ON.


The container ship Marseille was tied up at pier 37. A relatively new ship, built in 1977 by Smith's Dock, South Bank, Middlesbrough, it was having a checkered career. Originally Manchester Venture, it was chartered out as Seatrain Bennington in 1977, came back to Manchester for a time in 1979 and then was renamed Marseille and chartered to Zim.

It sailed December 27, and over the next several years, as Manchester Liners disappeared into CY Tung's Orient Overseas Lines, it changed names eight times before reaching Chinese scrappers in Xinhui in 2002.
It had a capacity of 946 TEU, including 80 reefers and measured 17,385 grt, 17,607 dwt.
The similarly sized Fritz Reuter (see below) has a capacity of 946 TEU, including 80 reefers on 18,480 grt, 23,732 dwt. 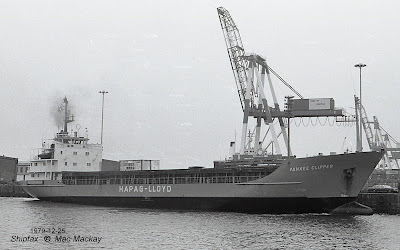 
On Christmas Day, the Canadian flagged Maurice Desgagnés moved from anchored to take a berth for bunkers at Imperial Oil. The ship was a precursor to Desgagnés' expansion from a base of coastal and northern supply shipping to worldwide trading. 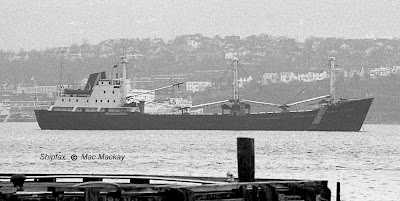 Built in 1963 by Terneuzen Shipyard in the Netherlands as Vaasa Provider, it became Lauri Ragnar in 1966 and Finnrunner in 1971. Desgagnés acquired the ship in 1972 to run between Montreal and Sept- Iles on a Clarke contract. It also traveled widely to the Great Lakes, Brazil, Guatemala, Bahamas and Egypt.

This was the ship's last visit to Halifax however. It sailed for Venezuela, and then loaded oak rail ties in New Orleans for Sept-Iles. On March 12, 1980 while about 75 miles east of Halifax the ship was struck by a powerful sea, took on a severe list and eventually heeled over on her beam ends. A helicopter from HMCS Huron rescued the 21 crew in three trips and the ship sank shortly after.

Another cripple arrived today. Biokovo had to re-stow deck cargo after going through some very high winds earlier in the week. Owned by Jadranska Slobodna Plovidba of Split, Yugoslavia (now in Croatia) the ship had flown the Yugoslavian flag since 1971.

Before that it was Manchester Port, built in 1966 by Smith's Dock,. South Bank, and another ship that was displaced on its trade route by the quick rise of containers.The 8168 grt, 12,060 dwt ship was built to Ice Class 1 for winter St.Lawrence service and was fitted with an array of cargo handling gear: 1-30 tonne, 2- 10 tonne and 1 - 5 tonne cranes and 4 - 10 tonne derricks.

It was renamed Ydra in 1980 and on January 20, 1983 it caught fire and was wrecked 1 mile off Bizerta on a voyage from Piraeus to Sweden.

The big bulker Oremar needed four tugs to move from anchorage to pier 25-26. In addition to the usual Point Vim, Point Vigour and Point Viking the bigger tug Point Valiant was also brought in to provide some extra power. 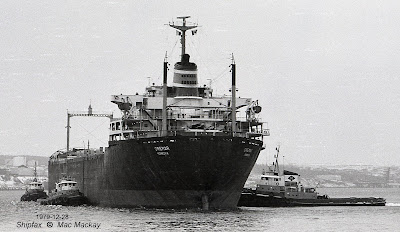 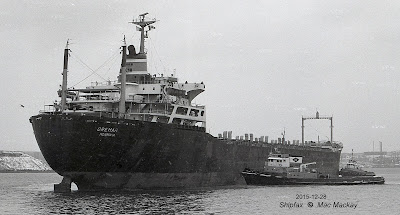 Oremar was working for Bethlehen Steel , and had a US and Taiwanese crew. It was en route to Sept-Iles to load. Welding repairs were completed by a flying squad from Halifax Shipyard and it sailed December 29. [It may have have arrived in tow of Point Valiant with hull cracks-not confirmed]

Built for Livanos as Marka L by Hakodate Dock in 1968 and measured 35,742 grt and 74,245 dwt, and was considered a giant at the time. It lasted until 1995 when it was broken up in Chittagong after four more name changes.

The magnificent Port Line reefer Port Chalmers arrived December 21 (featured here before). The largest reefer ever built, it was on its last legs. Obsolete when it was built in 1968 it was almost immediately outmoded by containers. The last ship built for Port Line, it lost its traditional funnel mark while in Halifax, taking up a Salén charter.

It sailed December 29 for Mexico, Long Beach, then Japan and was back in Falmouth in July 1981. It was laid up in 1985 and scrapped in Shanghai.

A traditional general cargo ship, Gold Mountain was built in 1963 by Uraga Dock in Japan for Zim Israel Nav Co Ltd as Tesdek. In 1974 it was transferred to Cedar Shipping Group, still under Israeli flag and renamed Gold Mountain. 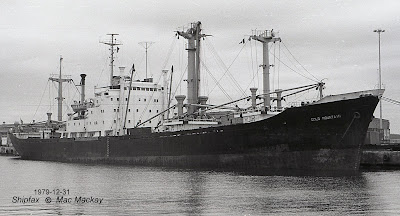 Gold Mountain at pier 30 was here on Zim breakbulk business.

In 1989 was sold to Costamare of Greece [now a frequent provider of charter tonnage to Zim Integrated Shipping] and hit the scrappers beach in Chittagong the same year.


Tuesday January 1, 1980 [12 ships in port, 17 tugs and suppliers, 8 fishing vessels, 11 government ships,  11 wrecks and relics, - not including scows, barges and harbour craft. If those are included, the number of identifiable named craft in the harbour comes to 104, not including the Eastern Passage fishing fleet]**


There was no let up on New Year's Day as the small general cargo ship Breehelle arrived at pier 24.
Built in 1971 by Baatservice, Arendal Norway as Angelika Lehmann for German owners, the 1585 grt, 3100 dwt ship was sold to Dutch owners in 1973 and renamed. 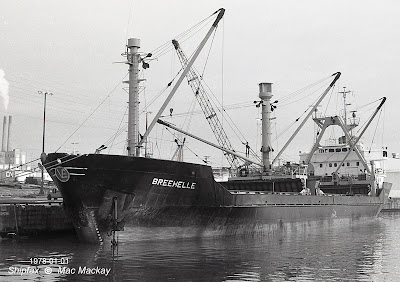 Nova Scotia Power's Water Street plant was pumping out electricity - it has since been converted to the company's corporate HQ and the stacks are long gone.

In subsequent years the ship has carried nine different names under the flags of Cyprus, Norway, Bahamas North Korea, Georgia, and last heard from, earlier this year, was flying the Moldovan flag for Syrian owners as Gulf Star.

And that was not all that was happening in Halifax, just some of what I managed to photograph.

* The count of vessels is very rough - based on my observations only and not on official records. It is probably off by two or three each due to arrivals during the night.