Strong winds persisted into the afternoon and evening as cold air continued to pump in.

The regular caller Frtiz Reuter  arrived on its 16th trip for Melfi Line and tied up at pier 42. 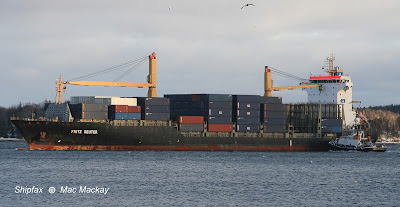 Atlantic Larch begins to push Fritz Reuter around to back in to pier 41 in a stiff breeze.

The next three callers were presented with a number of challenges, particularly since they were all due at the pilot station at 1600.

First in was OOCL Washington, which required the services of all three tugs to tie up at pier 41. Both the car carrier  Dignity Ace and the ConRo Atlantic Cartier took their pilots, then returned outbound to delay their arrivals until the tugs were freed up. 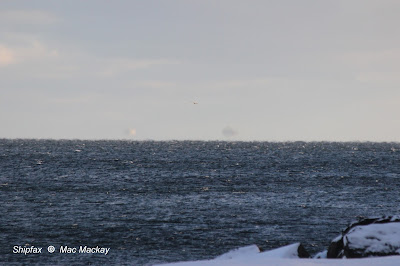 Yesterday's mirages were nothing compared to today's as OOCL Washington (right of centre) and Dignity Ace (left) approach the pilot station. Air temperature was -7C but water temperature remains a balmy 0C.

Dignity Ace then made its "re-entry", when the tugs Atlantic Larch and Atlantic Willow were available to take it in to Autoport. However once at Autoport the tugs could not hold the ship alongside in the high winds, and it left Eastern Passage for number one anchorage. Its anchor would not hold there, so it opted to head out to sea and try again in the morning. High sided ships like auto carriers are notorious for their sail effect, and must be handled with great care in windy conditions.

Meanwhile Atlantic Cartier took the tug Atlantic Oak as stern escort through the Narrows to Bedford Basin. Once there it had to await Atlantic Willow before it could get alongside Fairview Cove. The ship is also high sided and subject to windage too, but was able to dock safely eventually.

Dignity Ace is a first time caller, and at 6697 car capacity, it is the biggest ship in the MOL ACE car carrier fleet of 120 or so ships. It was built in 2010 by Hyundai Mipo, Ulsan, and measures 58,767 grt, 20,589 dwt. Flying the Bahamas flag, it is owned by Ray Car Carriers of Douglas, Isle of Man, and is on long term charter to Mitsui OSK Lines Auto Carrier Express.