Equinox Star measures 33,231 grt, 58,680 dwt, making it too large for the St.Lawrence Seaway. However with a visit for bunkers, and in ballast, at this time of year it is likely that it is headed for a St.Lawrence River port to load grain. [At time of writing ca.2100 hrs AST, the bunkering tanker Algoma Dartmouth was undergoing pump repairs, and was unable to deliver the fuel.] [By about 2200 it did get underway.]
UPDATE: Bad Guess! The ship is headed for Lome, Togo! 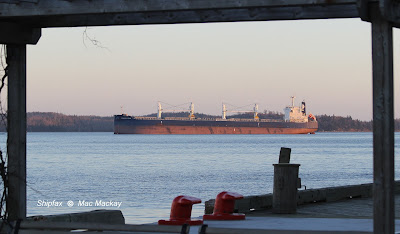 Built by Nantong COSCO KHI* in Nantong, China in 2011 and described as a Supramax, the ship carries four 30 tonne cranes each with its own 12.5 cbm grab bucket stowed on deck. It also has the vertical bow and non-projecting bulb that has been found to be more efficient for ships that do not make high speeds. It also allows the hull to be fuller forward to maximize carrying capacity. The very basic accommodation block aft and slender funnel speaks to the drive for minimizing costs in the competitive bulker business. The ship is owned by Equinox Maritime Ltd of Athens, Greece and flies the Cayman Islands flag.

The Cayman registry used to be the haven for yachts owned by wealthy persons with assets parked offshore to avoid taxes. It has recently become more respectable for commercial shipping, but it is still rare to see a very new and well found ship registered in that country.
For more on this ship see http://shipfax.blogspot.ca/2015/09/sunday-round-up-autoports-safety-valve.html

Meanwhile at pier 31 the Netherlands flag Helga was busy offloading the latest cargo of nickel sulfides from Cuba for Nirint Lines. The ship is managed by Wagenborg Shipping BV for a single ship company of Van Dijk Rederij. It has been used on a series of charters. Built in 2009 as Helga it was renamed Kent Atlas in 2010 (serving the Irving owned Kent Line) , 2012: Helga, 2013: Clipper Avalon, 2014: Thorco Tribute and reverted to its original name again in 2015.


It is also the product of a Chinese shipyard, this one 100% owned by the Dutch shipbuilder Damen, and located in Yichang, China. The ship is also a standard design CF 12000 [combi-freigher, 12,000 tonnes deadweight] to carry a wide variety of bulk and break bulk cargoes and has a capacity of 684 TEU. It also has two 80 tonne cranes, which were in use today lifting spreader loads of bagged cargo. 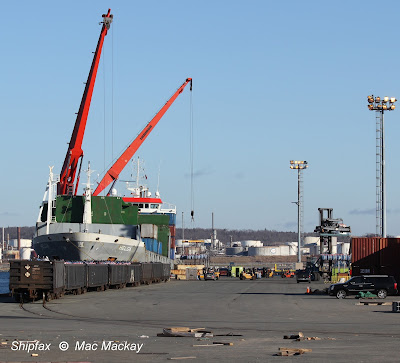 Forklifts big and small race around with bagged cargo as the ship discharges spreader loads of the cargo. Some bags are loaded directly onto railroad gondola cars, and others are stored in the warehouse. 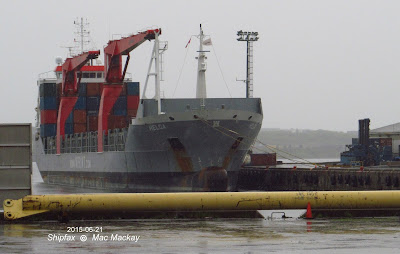 It was no where near as nice a day June 21 when the ship was here for the first time. With its cranes neatly stowed, and the hatches left clear for cargo operations, it still managed to carry a small number of containers on deck.