Among today's arrivals is Thorco Logic, one of nine sister ships in the Thorco Projects fleet. This is the fourth of the "L class ships to call in Halifax, all for work associated with fibreoptic cable. 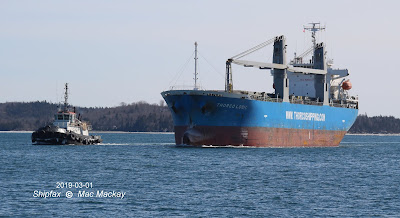 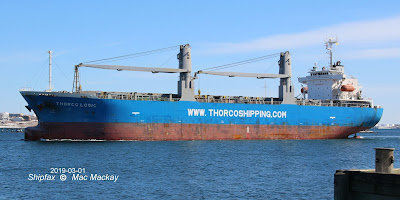 The ship is obviously in ballast, ready to take up its duties as a cable carrier.

Thorco, founded in 2003 and in 2012 merged with Clipper Projects has become one the larger players in the project cargo field, now with a fleet of more than 70 ships. They are active in wind turbine transportation and other non-standard types of cargo. 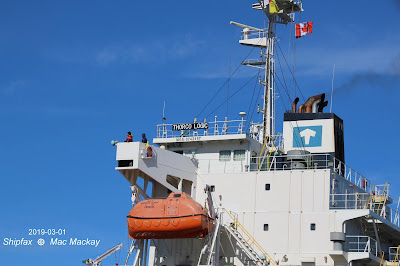 A harbour pilot guides the ship alongside pier 9C in sunny conditions.

The ship tied up at pier 9C. If it follows the routine of its sister ships, it will take on special steel framing to enable it to carry fibrepotic cable.

Thorco Projects is part of the privately held Thornico Goup, a conglomerate founded by father and son Thor and Christian Stadil of Denmark.

Another arrival today is Federal Yamaska also owned by a privately held company, in this case Montreal based Fednav. Registered in the Marshall Islands, it is a recent addition to the Fednav fleet. Built in 2013 as Lowlands Boreas for Cobelfret by Yangfan Group, Zhoushan, China, it is a 24,177 gt, 37,144 dwt bulk carrier fitted with four 30 tonne cranes.

Federal Yamaska picked up some frozen spray on its way into Halifax.

Fednav acquired the ship and renamed it in July 2018. This is a reverse of the usual pattern where Fednav builds new ships and in a few years sells them and charterers them back. Federal Yamaska is the 60th ship in the Fednav fleet to be managed by Anglo-Eastern Ship Management. Fednav is fond of naming its ships after rivers, and this one, despite its Japanese sound, it is derived from an Abenakis word related to  bull rushes. It is a tributary of the St.Lawrence River, flowing north from Lac Brome near the New Hampshire border, and enters Lac St-Pierre after winding 110 miles through the Eastern Townships.

The ship arrived from Sao Luis, Brazil with a cargo of bauxite / alumina. After bunkering from trucks at pier 27, it will head for La Baie Comeau, QC.

Two usual Friday ships were not in port today. Oceanex Sanderling usually arrived mid-week and sails in Fridays for its weekly run to St.John's. The ship was due to sail from St.John's today and is currently en route to Halifax, with a possible arrival tomorrow. It is now due to sail on Sunday. If the ship was not held up by ice itself, it is likely that other Oceanex ships were held up from Montreal and tied up the berth in St.John's.

Also a Friday regular Nolhan Ava is still in St-Pierre. The ship was expected to inaugurate its Argentia service, added to its regular Halifax / St-Pierre route, It was also planned to change terminals from Halterm to Cerescorp, Fairview Cove this week.
Much of the ship's St-Pierre cargo comes from France via ACL ships which also call at Cerescorp. Eliminating drayage between the two terminals would certainly make sense, while freeing up a berth at Halterm.