Halifax has always had competitors in the container  business, but now there will be a new one. The Port of Quebec City has just announced that they have selected Hutchinson - a world wide terminal manager - to develop and operate a brand new container facility in the Beauport sector of the Port of Quebec. 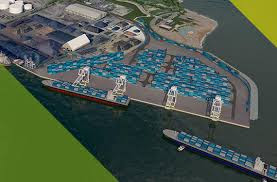 Quebec City's new container terminal will be on newly created land at Beauport.  The city itself is toward the bottom left, and there is a small sandy bay to the top right.

As the closest port to Europe on the North American eastern seaboard Halifax has always enjoyed an edge over other ports due to the desire of shippers to land their boxes and get them on the train or on the road to destination as quickly as possible. Main competitors have always had a number of disadvantages that have helped Halifax, but these are all gradually diminishing. New York had draft and bridge clearance issues, but those have been eliminated, at great expense, in recent years. Rail constrictions have been and remain an issue. Nearby ports of Baltimore and Philadelphia have picked up some of the slack.

Those US ports, particularly Charleston, Savannah and Jacksonville have been given a big boost with the expansion of the Panama Canal. Very big ships can now reach those ports from Asia and the ports have responded with huge investments in dredging, berth expansion, and larger cranes, more rubber tired gantries (RTGs), etc.,

Halifax's position is reversed when it comes to ships from Asia via the Pacific/Panama. We are the farthest away, and with the smallest source of, or destination for, cargo, the port is the last on the list if we appear on the list at all.

Ships sailing directly from western Asian ports, via the Suez and Mediterranean can still compete with the Pacific/Panama route but in order to make time must not stop at too many Med ports. Halifax is an ideal port for them since it involves the least sea time.

As for other eastern Canadian ports, Halifax had many advantages, but again they may be eroding. When container shipping took off in the late 1960s, Halifax was soon ready. However Canadian Pacific Steamships, as they were then, established a container facility in the Port of Quebec. It was a good idea at the time, since there were no bridge height limitations. It was well down stream of the Quebec bridge and the St.Lawrence River above Quebec City was too shallow for large ships. It was also in a somewhat better position than Montreal in terms of winter ice. CPSS and Manchester Liners  working together already had ice class general cargo ships that they converted to carry containers.

CPSS established a small, one crane terminal close to their own rail line, which served the area of the port below the famous ramparts and connected to the main line via an 1800 foot long tunnel under the Plains of Abraham battle field. Built in 1930 to serve the needs of passenger ships, it was restricted to single stack containers and had grade and icing issues. It imposed severe restrictions on container traffic and within ten years CP closed the terminal and moved to Montreal.

Since then Montreal has become a major container hub despite being a thousand miles inland. Not only has the port invested in infrastructure with rail on dock, cranes and other equipment, it has the advantage of three rail connections. CN, CP and CSX, all serving the US mid-west, the major destination for a large portion of import cargo. It is also a fact that transatlantic trade has not suffered the ups and downs of Asian trade and this is the major area of concentration for Montreal. Montreal, and Toronto (reached by rail or truck in less than 24 hours) are also the major population centres in Canada.

To help matters, the St.Lawrence River channel between Quebec City and Montreal has been deepened, but more importantly has been widened. Shipping lines have been able to use some quite large (and wide) ships, loaded to less than their maximum depth to serve Montreal. Some lines have built ships specifically for the St.Lawrence route, with improved ice capability, and relatively shallow draft. Montreal is also working on a new container facility downstream on the south shore at Contrecouer, that will have excellent rail access, but also far less congested road access. As free standing adjunct to the Port of Montreal it has expansion capability, unconstrained by other port infrastructure.

Big container ships, lightly loaded to reduce draft, can operate at speeds of 20 knots on the lower St.Lawrence. They could load to maximum draft if sailing only as far as Quebec City.

Montreal will always have the ice and draft issues, and Contrecouer is not expected to host much larger ships, but will add to the Port of Montreal's capacity and speed in clearing cargo. (Montreal is a terminal port - that is to say that most container ships unload all their cargo there, and load afresh, whereas Halifax in most cases is a way point on a string of ports.)

Quebec City, which, since CP closed their terminal, has had no dedicated container terminal and no regularly calling container lines. They have apparently been jealously watching that traffic sail by their piers without stopping. 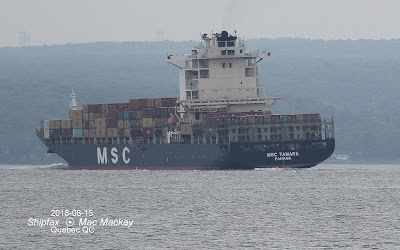 Another lightly loaded container ship turns its tail to Quebec City and revs up its speed. It has just exchanged pilots and is about to make the wide turn around Pointe Levis.

Quebec's new facility, to be called Laurentia, will be state of the art, and have a small carbon foot print (read electric RTGs - Halterm take note), is on a brand new site, which does not exist at this point. It will be created on fill at the end of the current string of Beauport flats bulk docks, so will be able to take ships of any length. And it can be expanded more or less indefinitely. It also has deep draft - the river gets shallow farther upstream). There are no bridges to restrict the height or width of ships between the port and the Atlantic Ocean and it will have direct, free air, rail access via CN Rail with rail on dock. Ships can travel at relatively high speed almost all the way from the Atlantic to Quebec City (except for whale protection zones), unlike the upper river with its winding channels where speed is restricted, pilotage costs are higher and winter delays can be expected due to ice. The time for a ship to reach Montreal from Quebec City is roughly a day. A truck can do it in 90 minutes half that time.

The current Beauport docks (which would be off to the left of the aerial view) host bulk commodity cargoes such as petroleum, coal, and ore. The new extension would be to the right of these views. 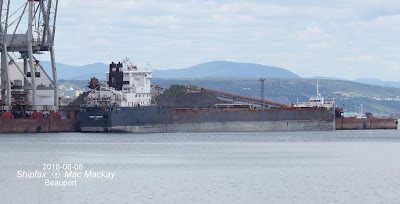 Quebec City has its eyes firmly set on larger ships and is in direct competition with Montreal for business. Naming the facility "Laurentia" focuses on serving the huge St.Lawrence Basin area, which includes the Great Lakes region. (Whether they have any thought for Halifax is doubtful.)

It all sounds ideal and it certainly has numerous advantages. Except that there are serious environmental issues relating to adjacent wetlands for migratory birds and recreational activity. The once bucolic basin where the Riviere St-Charles empties into the St.Lawrence has become an industrial hub, but the north side is a recreational zone for wind surfers. The tidal flats still host snow geese and other migrators that have somehow survived this desecration. They will continue to take the back seat to port development.

This 1860s view of Quebec from Beauport, with the Citadel off to the left of centre, shows the St.Charles flowing in from the right. From there almost to the foreground is now heavily industrial.
(Edwin Whitefield lithograph Mac Mackay collection- edited for this post)

How will this new port effect Halifax? With many of the restrictions to St.Lawrence ports reduced or eliminated, cargo will no doubt be siphoned off to Quebec. I still see ice as a major encumbrance since few if any of the giant container ships (10,000 TEU and up) are ice class, and in fact few of the intermediate size (7500 to 10,000 TEU) are ice rated. Nevertheless many non ice rated ships would still be able to serve the port for at least nine months of the year.

Whether the project is successful, depends more on the efficiency of the rail connection, and the demand for ships that are too large for Montreal. Its distance from the ocean will still be another important factor, but not for the strictly transatlantic trade. Quebec is also looking for trade via the Panama Canal, but I see this as a major stretch, Quebec is even farther away from Panama than Halifax. However Hutchinson's deep Asian roots are not to be discounted.

CN Rail, which also serves Halifax and the other major Canadian ports of Vancouver and Prince Rupert is a common factor. Since their bid to acquire an interest in Halifax's Halterm container terminal was not accepted, their loyalty to Halifax will be put to the test.

Certainly the news about Quebec will not be well received by Sydney or Melford, NS, both with aspirations to become container ports. (see more below)

It is another reality (proven over and over again in history) that Halifax does not have much political clout, and therefore port infrastructure built with pots of federal money will always go where the most votes are. That is why it is imperative that the Port of Halifax develop a master plan that looks into the future while still performing emergency surgery on its current port infrastructure.

A green field site is the only answer and it will cost billions. If the money is not available, the container trade in the Port of Halifax will die by inches. Will that be the end of the port as we know? Likely. It will become a minor adjunct and outport, concentrating on cruise ships and small feeder services shuttling containers to major hubs.

Halifax should be one of those major hubs, but lack of progress on re-development may mean that the opportunity has been lost. Certainly overhauling the current port lands is necessary but there is still not enough room for what is needed in the long term.

Nothing short of a multi-berth (four 10,000 TEU ships at a minimum) facility with unlimited backup land and clear rail access, to completely replace what we have now is the least that will be required. Ice free, deep draft and no bridges are what we have to offer, and it should be promoted intensely in the run up to the federal election. Regrettably there is no mature plan to promote, and we will end up with a short term fix to the determent of other port business.

Read more about the Port of Quebec's plans on their website: https://www.portquebec.ca/en/