K-Line container ships, (now part of Ocean Network Express) named their ships after bridges, but did not get around to Halifax's bridges. In recent years they have sailed below them many times as members of the THE Alliance and some of its predecessors.

Today It was George Washington Bridge "doing the bridges" as it made its way up the Narrows to Fairview Cove. 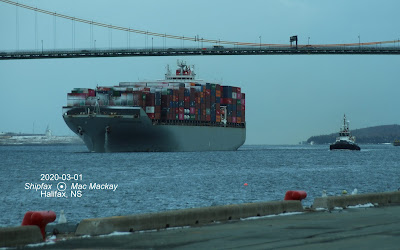 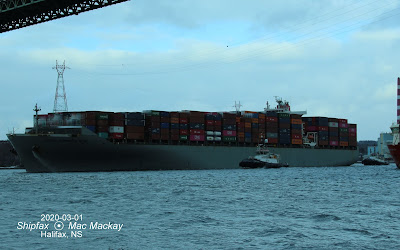 With Atlantic Larch made up forward, Atlantic Fir readies to brake as the ship passes under the A. Murray MacKay bridge.

Slightly blustery conditions (note the direction of the spray from the hawse pipe), some snow in  the air and a bit of frozen spray on the forward containers make the scene look a bit more wintry than it really was.
.
Posted by Mac at 9:31 PM