Usually there is only one autocarrier in Halifax at a time, so it is rare to get two in the same photo. It is also unusual for autocarriers to visit the Richmond Terminals berths (piers 9 to 9C). Today was such a day.

Siem Cicero was finally allowed to dock at Autoport, after Covid-19 symptoms were detected on board. The ship was originally due March 22, and since then has been  working its way up and down the coast in a holding pattern. It was as far as the mouth of the Bay of Fundy yesterday.

While Siem Cicero was working its cargo at Autoport (in the background), Grand Diamond  made its way inbound to Pier 9C. It was arriving from New York. 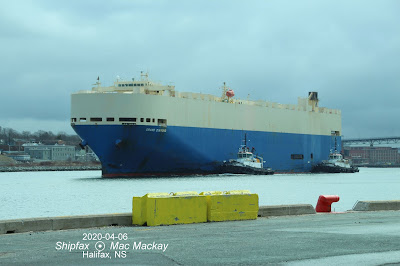 With tugs alongside it transited the Narrows and went to Bedford Basin to turn, then berth bows south.

Grand Diamond was built in 2007 by Toyohashi Shipbuilding in Japan with a gt of 59,217 and a dwt of 18,058. It is part of the Cido Shipping Korea managed fleet, but is owned by Ocean Transit Carrier SA of Japan.
Auto carriers berth at pier 9C for a variety of reasons: special cargo such as military; to reduce draft for St.Lawrence River; quarantine. There was no evidence of the latter being part of the plan.


Addendum:
The ship unloaded 350 cars at pier 9C then sailed this afternoon for Singapore via Suez.