Ships arriving in Halifax for Asian Gypsy Moth inspection are often bulkers which are rare enough in Halifax, but a wood chip bulk carrier is even more unusual. McQueen is one such ship arriving today from Dafeng, China. 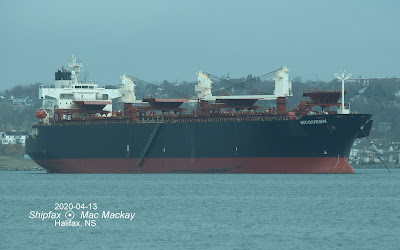 Tsuneishi Shipbuilding Co, Fukuyama, Japan built the ship in 2009 as Ocean Destiny and it measures 39,907 gt, 49,546 dwt. It is equipped with three cranes and four hoppers with chutes to direct cargo to the four holds. Wood chips are a high volume for weight commodity, which explains the extremely high freeboard of the ship. 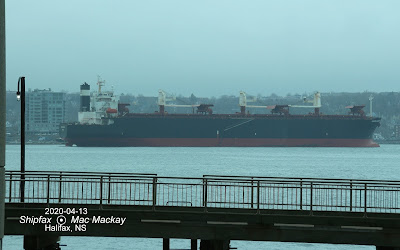 The ship was renamed in 2016 and is now managed by Royal Marine Holdings Pte Ltd, based in Singapore, but is owned by Hope Well Shipping Ltd of China and registered in Liberia.

The Canadian Food Inspection Agency usually takes three hours to complete its inspection for the invasive species. After that the ship is expected to sail for Belledune, NB.