Siem Cicero - not welcome in port

The question raised in Saturday's post has apparently been answered. The Siem Cicero has been restricted from entering port due to Covid-19 - like symptoms among the crew. The ship self reported on March 17, shortly after leaving Emden for Halifax. 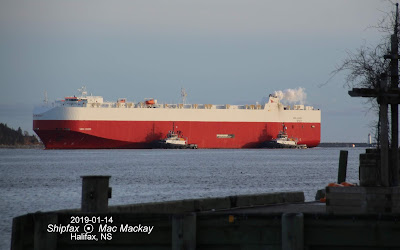 Under the Quarantine Act the Public Health Agency of Canada barred the ship form entering port to prevent any possible spread of the virus or disruption to the supply chain.

According to press accounts the ship will not be cleared to enter port until 14 days after the last symptoms appeared in the crew. Meanwhile the ship continues to drift idly offshore.