Cars and Cans to Newfoundland

As discussed in previous posts the development of automobile transport to Newfoundland (cars) and containers (cans) began to take off in 1970 when Autoport and Halterm started operations in Halifax.
Autoport, majority owned my Canadian National Railway, contracted to deliver new cars to Newfoundland.

Halterm, (also with CN part ownership) serving several container lines, had import and export cargo to/from Newfoundland which it wanted to expedite directly, without having to load or unload the contents in Halifax, although it had the capability of doing so. 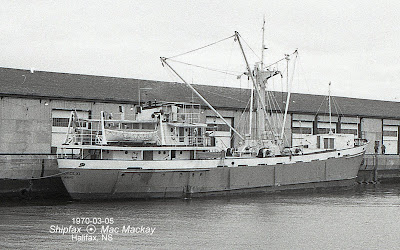 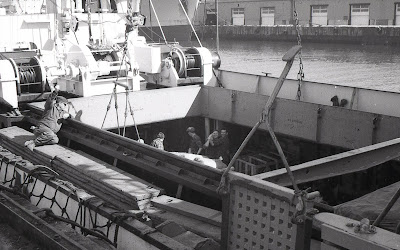 Handling and transit damage, pilferage and labour costs were all saved by going to containers. O.K.Service XI still had wood hatch boards and canvas hatch covers as late as 1970. whn it was displaced by the Travetal.

CN contracted Fednav to transport cars from Autoport until the ill-fated Trident deal - see post http://shipfax.blogspot.com/2020/04/travetal.html . They wisely went back to Fednav with the 275 CEU Federal Avalon in October 1974.

Car transport to Newfoundland was doing so well that another ship was justified. Fednav had anticipated this and had previously acquired Federal Humber and chartered it out until needed. In late 1978 they also decided to take truck and container traffic from Halifax. Even though this seemed like competition from their Gulf ferry service, it really speeded up delivery of containers to St.John's.

Federal Humber was a larger ship but was still dwarfed beside typical deep sea car carriers such as Dyvi Kategat . But it had the advantage of working inside the Autoport jetty at the same time as ships worked on the outside. (The jetty was no more than a few surplus barges tied together and anchored.) 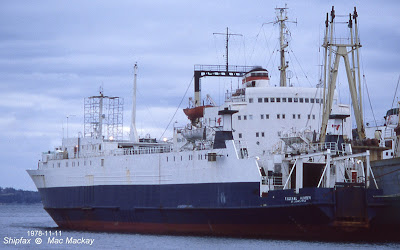 Federal Humber carried 40 trailers and 200 cars. The ship had been lengthened from 300 to 385 feet to increase capacity, but it still had a very small and narrow stern ramp and side doors.

By 1980 traffic had continued to increase and Fednav brought in Federal Nova 3809 gt, 6400 dwt, to replace the two smaller ships. Making two trips a week it was expected to carry 12,000 cars per year plus trucks and container 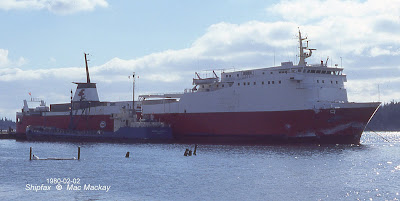 Launched as Stena Tender in 1976 by Osterreichische, Kornenburg, Austria, it was lengthened from 102.0 to 117.0m and completed in 1977 as Goya by Nobiskrug, Rendsburg. It had eight subsequent names before it was scrapped in Egypt in 2012.

Federal Nova lasted barely a year when it was replaced by Cavallo.

Cavallo was a much larger ship, with a capacity of 430 TEU and a large RoRo capability, including oversize loads.

While CN and Autoport were concentrating on moving cars the long established St.John's shipping and agency firm A.Harvey + Co had revived cargo service between Halifax and St.John's by starting a container service from Halterm using the little 100 TEU Newfoundland Container.

In July 1982 NCL and Fednav announced that they would be merging their services from Halifax using the Cavallo exclusively. The new company, to be called Atlantic Searoute Ltd (ASL) was soon expanded with Canada Steamship Lines (CSL) taking over half of the A.Harvey interest.

This followed  a prior merger involving the CSL / A.Harvey St.Lawrence service from Montreal to St.John's called Atlantic Freight Lines Inc (AFL). (Fednav was part owner of CSL at the time.) That line had just merged with Newfoundland Capital Corp's Newfoundland Steamships Ltd to form ACE, Atlantic Container Express. That line also served Corner Brook, but that was soon discontinued. ASL started a Corner Brook service from Halifax in 1988 and maintained it for many years. 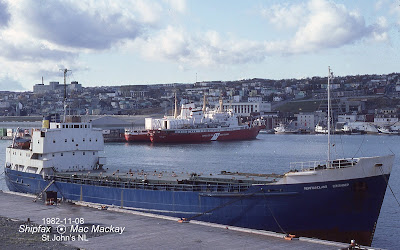 With Cavallo able to handle all the traffic out of Halifax, Newfoundland Container was laid up in St.John's and sold in 1985 to Cayman Island flag owners as Caribbean Victory. It became Lefkimmi (Honduras) in 1986 and in 1988 St.George (Honduras) before going to the Belize flag in 1992 as Container Express. It was then reported sold in 1993 and sometime before January, 1999 was reported by Lloyd's as "scuttled." I have no more details than that!

Cavallo soldiered on until the next development in the evolution - to be  continued........
For a more detailed history of Cavallo see: http://shipfax.blogspot.com/2014/02/finished-with-engines-cabot-on-last-leg.html