The container ship ONE Magnificence made its second call in Halifax today. It is on the return / eastbound leg of its voyage for THE Alliance. When it arrived on the westbound leg on April 5, it was the first Ocean Network Express ship to be seen here with the magenta hull colour. 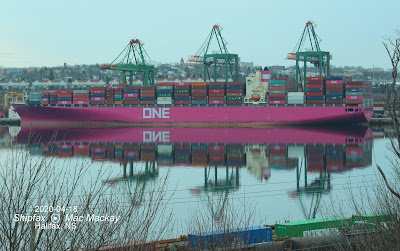 Built in 2010 as MOL Magnificence it received its new name and new paint job during a refit earlier this year. The 78,316 gt, 79,417 dwt ship has a capacity of 6724 TE including 500 reefers, and was built by Mitsubishi Heavy Industries in Kobe, Japan.