As one of the east coast "winter ports", along with Saint John, NB, Halifax always had mixed feelings about the arrival of spring. Ships that would not dare to chance an encounter with ice and had been calling in the winter ports would now be shifting to the St.Lawrence River and even the Great Lakes. This meant a huge reduction in shipping activity in Halifax, with very little offset.

One ray of light was the arrival of the first grain loads from the Lakes. Until 1959 only small ships could reach the Great Lakes, and then only seasonally and grain export ports such as Montreal, Sorel, Trois-Rivieres and Quebec City were also cut off by winter ice. The federal government subsidized railway shipping rates to Halifax so that grain farmers could get their grain to international markets more effectively. Called the "Crow Rate" it meant that the cost to transport grain by rail from the prairies was the same to Vancouver or Halifax. A huge grain elevator was built in Halifax to store grain during the summer and ship it out during the winter.

Once spring arrived, so did grain by ship, from ports as far away as the Lakehead. 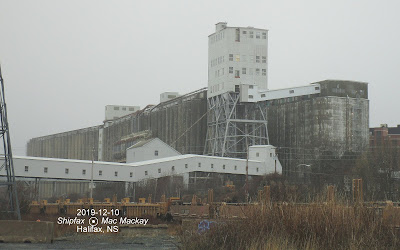 Before the St.Lawrence Seaway was built, the size of ships that were able to reach the Great Lakes was limited by the size of the St.Lawrence canals. The earliest canals were minuscule, but by the time of Confederation in 1867 plans were afoot to enlarge the locks to allow ships of roughly 260 feet x 43 ft with a 14 ft draft. Work was mostly completed in 1901.  A series of locks bypassing Niagara Falls, had been built to the same size, and this permitted ships to carry grain (and all sorts of other cargo) from the Great Lakes to salt water.

A special breed of ships, called canallers were built to the maximum dimensions of the locks but with scantlings to permit 16'-6" draft when not "canalling". The ships were also built to Home Trade Class I (trade to the West Indies) or II (Gulf of St.Lawrence and eastern seaboard to New York.) They were thus able to reach Halifax with grain cargoes, but most of the grain arrived by rail because the ships were so small, and the Crow Rate favoured rail.

In the early 1950s shipping companies were experiencing a boom with the post-war expansion of the Canadian economy. Ancient steam powered canallers were not able to meet the demand for ships and despite the looming arrival of the Seaway, they were forced to build new ships but to the old canal dimensions. Knowing that the Seaway would be opening in 1959 they designed the new ships to be lengthened, and even deepened in some cases. 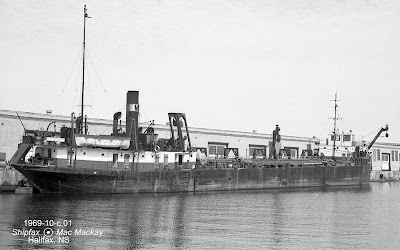 Most of the old steam canallers were scrapped when the Seaway opened. A very few, like the Charles R. Huntley, built in 1926, found new work. Converted to a trailing suction hopper dredge, it worked on construction of the south-end container terminal in Halifax.

It was easy to see why the old ships were no longer profitable. Two of them could fit into the new Seaway locks with room to spare. Shipowners began to build ships to suit the 730 ft x 75 feet dimensions and with smaller crews. 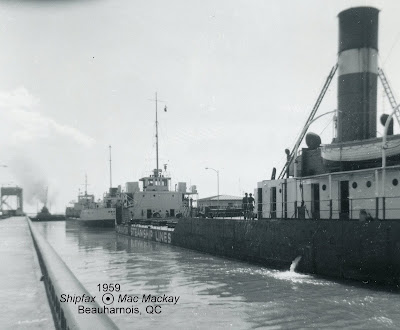 This scene, one of my earliest photos, shows the Canada Steamship lines Elgin, a steam canaller in the foreground and another steamer in the background (identity not recorded).
In the middle is one of the new diesel canallers, Sarniadoc.

For the first several years after the opening of the St.Lawrence Seaway in 1959 the grain ships coming to Halifax ships were former canal sized ships that had been lengthened. The Hall Corporation of Canada was the company with the most of these ships, all very similar in description. 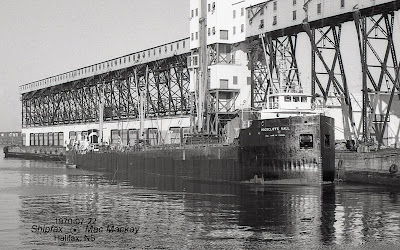 Built in 1958 by Davie Shipbuilding + Repair in Lauzon, QC, as a twin screw motor canaller, the ship was lengthened and deepened in 1961 by Canadian Vickers in Montreal. At 342.8 ft long it now had a tonnage of 3543, up from 2262. It was a regular in Halifax bringing in grain.

In 1972 it went back to Canadian Vickers and was converted to a tanker. Its forward cabins were moved aft and it was renamed Island Transport.

When owners Hall Corporation of Canada Ltd went out of business the ship was sold in 1986 to EnerChem Ship Management and renamed Enerchem Laker. It did not call in Halifax under that name, but it did return in 1990 under the name Recovery VIII after it had been sold to Panama owners.

On Christmas Day 1990 it left Halifax under its own power, but in tow of the Boston tug Russel Jr. Once in protected US waters it carried on to Panama un-aided where it was renamed Morgan Trader in 1998 and Anna II (Honduras flag) in 1998. Its fate since then is uncertain and has likely been out of service for some time. 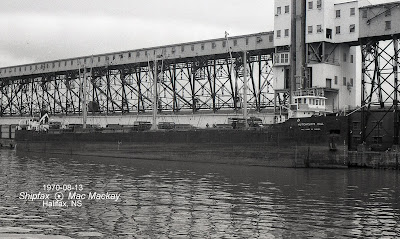 Another twin screw motor canaller, Hutchcliffe Hall was built by Canadian Vickers in Montreal in 1954. In the reverse of its fleet mate it was lengthened and deepened by Davie Lauzon in 1959, going to 343.8 ft long and increasing from 2143 to 3476 gt. Dwt increased from 2143 to 3376 tonnes.

In 1972 the ship was converted to a spoils carrier for the North Traverse dredging project on the St.Lawrence River. It was renamed Ile aux Coudres. In 1982 it was towed to British Columbia and in 1984 renamed Canadian Challenger in 1986 and was eventually scrapped in 2002. 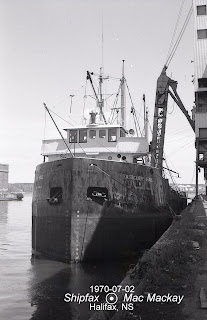 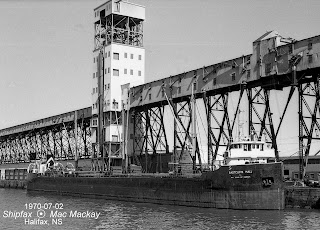 After unloading grain in Halifax in early July 1970 (see photos above) the ship sailed in ballast to Sorel, QC where it loaded pig iron for Saginaw, MI. After transiting the US locks in the St.Lawrence Seaway July 14 the ship wandered off course, grounded, then struck a submerged pier and sank very quickly near Morristown, NY. Nine lives were lost including the captain and his teenage son, the chief engineer his wife and their small daughter.

The ship's cargo was recovered, and the wreck cut down to deck level. Its hull was filled with stone and left in place.


Other shipping lines also has modern canallers that brought grain to Halifax. Among them was N.M.Paterson + Sons Ltd.

Built in 1956 by Atlantic Shipbuilding Co in Newport, Wales, it was a 2193 gt ship equipped with a pair of deck cranes for handling general cargo. It was never enlarged and continued to operate until 1975 when it was sold overseas. 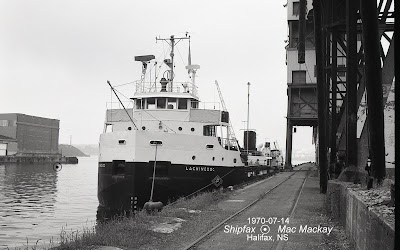 Reamed Emerald by United Arab Emirates owners, it was lost in the Arabian Gulf November 8,  1981. 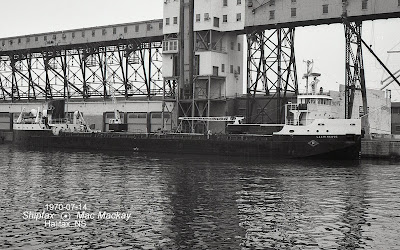 In January I also covered another pair of canallers in the same trade.

In the early 1970s shipowners began to invest in larger ships and the days of the old canallers were numbered. For several years re-purposed cargo and bulk carriers brought the grain, but eventually it became self-unloaders only. 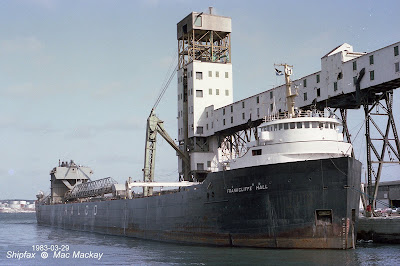 In 1983 the first grain arrived on Frankcliffe Hall, on March 29. Even though it was a self-unloader the Halifax grain gallery did not have a hopper system, and still had to use the time consuming grain leg. Eventually the hopper was installed and Frankcliffe Hall was renamed Halifax, but that will be the subject of another post.

The Crow Rate was eliminated, and little grain is exported from Halifax now. Most of the incoming grains (including corn) are for local consumption.

This year, in a bit of a turnaround, the first ship to use the St.Lawrence Seaway on opening day was CSL's Baie St.Paul from Halifax with a load of gypsum for Hamilton, ON. 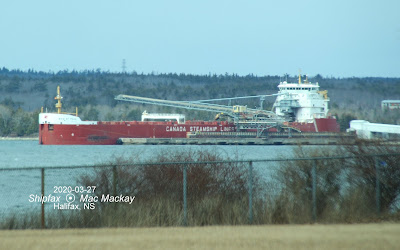 Regrettably fuzzy shot of Baie St.Paul loading gypsum for the Lakes on March 27.

It is possible it will also be the first caller in Halifax from the Great Lakes too since P+H Milling owns the flour mill in Halifax and has a grain storage facility in Hamilton.