Canadian National Railway took over coastal freight and passenger services in Newfoundland and Labrador as part of the Confederation with Canada in 1949. They operated their own ships to serve numerous outports, in addition to the regular Cabot Strait freight service out of North Sydney, NS to Port aux Basques. 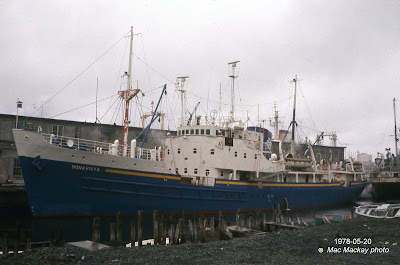 CN replaced the old "inherited" fleet with ships like the passenger/cargo ship Bonavista, 11174 gt, built in 1956 by Hall Russell in Aberdeen, Scotland. It was sold in 1988 and broken up in 1989. 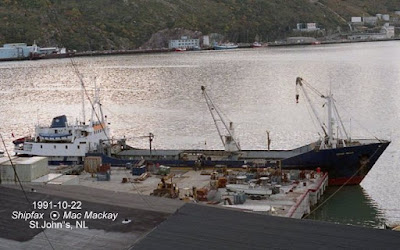 CN never seemed to have enough ships of their own, so they were always chartering in ships from other operators. Some of those operators had very little other business than with CN but others were owned and operated by fishing and or trading companies that had built in work of their own, often salt fish, but also potatoes, and other Canadian exports. As previously mentioned some of that work was with Canadian ports, US ports and into the Caribbean. However at certain times of the year they turned to working for CN carrying whatever cargo was needed.

For the latter trade there was return cargo in the form of salt and rum, but from Canadian and US ports it was quite varied and included manufactured goods, non-perishable food stuffs and some bulk cargoes such as coal.

As there is today, there was also a Montreal / Newfoundland service. In the mid 1960s it was operated by Newfoundland Steamships (1965) Ltd (NSS). The majority owner of the company was Clarke Steamships, with others such as Crosbie + Co and A. Harvey with minority shares. Thanks to operational and shipyard subsidies, they ordered new ice class ships that were to run  year round carrying seventy-six 20 ft standard containers on deck and a form of container palletized cargo that was loaded through side doors in the ship. Forklifts and elevators were used to distribute the cargo in the ships holds. Speedier loading and discharge rates allowed the ship to maintain a weekly schedule.

The first ship was Cabot and it began operating in 1965. Built to a high ice class, it was able to run a regular schedule from Montreal all winter. However for the winter of 1965-66 Cabot shifted operation to Halifax, running weekly from Pier 9B, receiving cargo by truck and rail to the freight sheds and using special weather protected ramps to load the ship. These ramps also compensated for tide, which was not a problem in Montreal.

Unfortunately on December 16, 1966 Cabot capsized while loading in Montreal with the loss of two lives and nine injured. The ship was salvaged and rebuilt, but it was June 1966 before it could be returned to service.  Clarke borrowed CSL's Fort St.Louis for a time, but when sister Chimo was delivered in 1967 they ran strictly from Montreal. 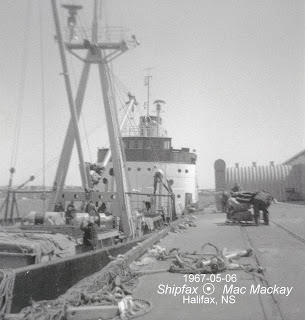 The line never returned to Halifax, and the telescoping freight ramps were moved to Corner Brook. Please excuse fuzziness of the above, but it is my only photo showing more than just the edge of those side loader ramps. 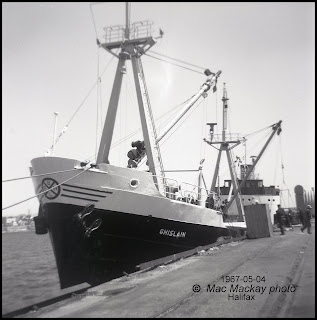 Stepping back a few paces for a broader view the former British coaster  Ghislain built in 1949 and owned by Bouchard Navigation was loading for CN in the spring of 1967 when ice conditions had blocked Sydney harbour. For more on this ship see: http://navigationquebec.blogspot.com/2016/11/poste-51d-ghislain-marie-ghislain.html 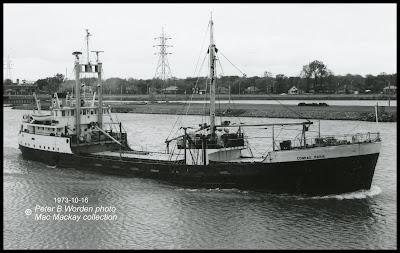 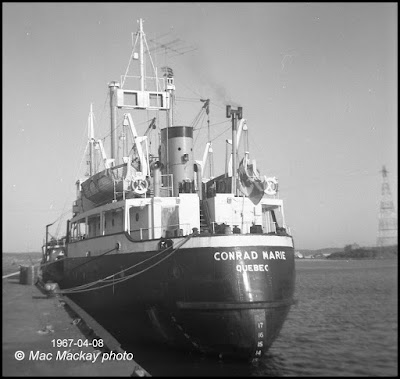 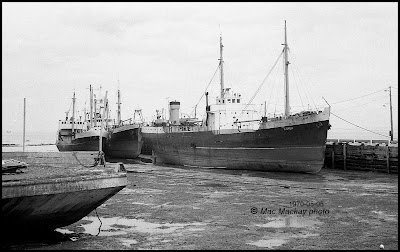 C.Omer was built in 1946 and its hull was also of completely riveted construction.
For more on this ship see: http://navigationquebec.blogspot.com/2016/10/poste-51a-caboteur-omer-marie-c-omer.html

Unfortunately Bouchard became over extended and went out of business, but several of its ships were sold to Newfoundland owners. 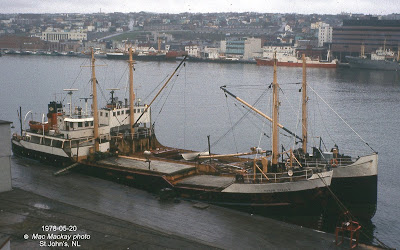 For more on the Bouchard ships, see several entries in my Navigation Quebec blog under "Euclide Bouchard"

Many other Nova Scotia and Newfoundland owners used ex British ships for CN work or for their own account.

Pickford and Black were agents for a service operated by H.B.Dawe Ltd of Cupids, NL, which ran a weekly, two ship service from Halifax from 1960 - 1972, using the aged Cupids and aging Domino Run. 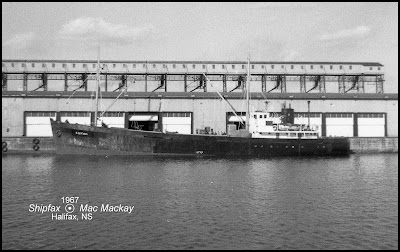 Cupids was built in 1940 by Grangemouth DY as Durward, it measured 681 gt. It was sold foreign in 1974 and may have operated in the Caribbean. On January 5, 1977 it sank in St-Pierre harbour and was abandoned as a wreck. 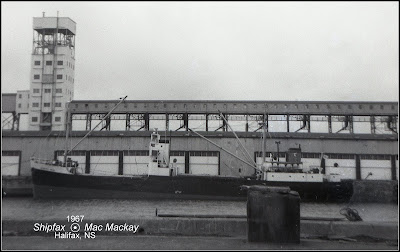 Running mate Domino Run was built in 1946 at Burntisland as Knebworth and operated under the Irish flag as Dromineer before Dawe acquired it in 1964. The 857 gt ship was laid up in 1972, ran under Cayman flag from 1975, then had a main engine breakdown in the Aegean Sea off Crete, August 21, 1978. New Greek owners renamed it Mino but it was seized in Tripoli January 25, 1979. It was dropped from Lloyds in 1999.

Newfoundland Canada Steamships, operating out of Halifax was in fact owned by General Steam Navigation, a subsidiary of P+O and supplemented the (previous post mentioned) service by Bedford II with various ships, some of which were former GSN vessels. 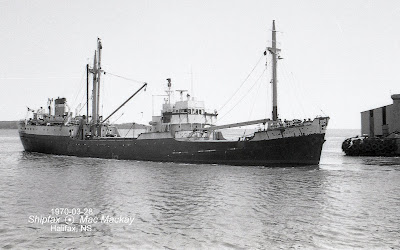 One of my favourites was Glencoe operated by Capt. D. Frampton of St.John's. Built of riveted construction  in 1947 by Goole Shipbuilding as GSN's Teal (its ships were named for birds) it came to Canada in 1963. 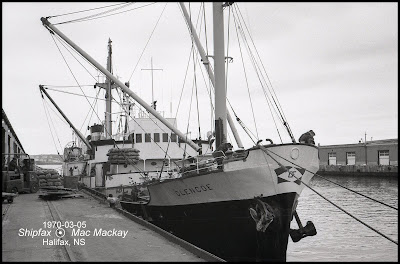 It was still loaded in the old laborious manner. One pallet at a time was slung aboard, and the bags hand stowed, and the pallet sent back to shore. The presence of fork lift trucks (invariably called Towmotors, no matter the brand) were the sole touch of "modernity".

Glencoe lasted into the late 1970s, but was sold in 1979 from layup in Halifax. It went to Quebec where it loaded scrap and sailed for Miami as Jehovah Star for Haitian owners. It had a checkered career thereafter. After a grounding in November 1978 it was confined to port in Miami then renamed Etoile de Bethlehem in 1988 and both Ayatollah and Iron Maiden in 1989. It was finally deleted from Lloyds in 2012.

Another former GSN ship was built in 1950 by Henry Robb, Leith sas Hirondelle. The 757 gt ship joined the Lake Shipping Co Ltd in 1966 and was renamed Clyde for Harold Bertram Clyde Lake, founder of the major Newfoundland fishing enterprise, that became the Lake Group. 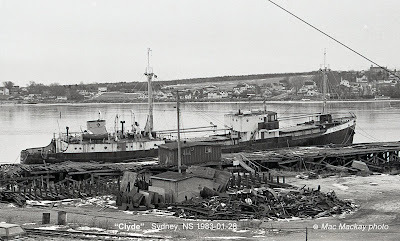 It was left abandoned in Sydney, NS for many years and eventually sold by tender in 1984 as a derelict. I believe it was expended during military target practice off Halifax in 1986. 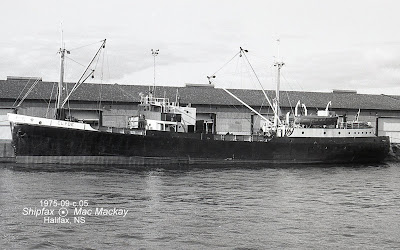 Another British company, Dundee, Perth + London operated in Canada in the 1950s and 60s, running between the Great Lakes and Newfoundland seasonally. One of their ships was the London built in 1951 by Burntisland. It was allowed to operate with British crew in the early days. In 1961 Capt. Josiah Winsor acquired the ship (possibly with Crosbie assistance) and it was renamed Winsor Trader. It participated in DoT northern supply that year. 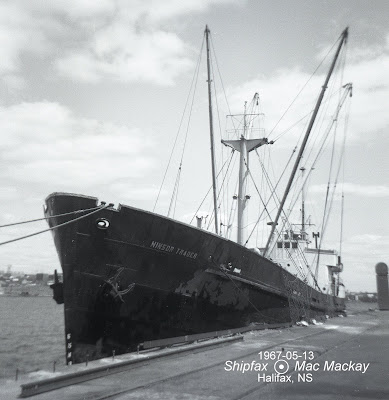 It was also known to fill in for CN and NSS when needed. In 1967 it was sold to Topsail Shipping and renamed Topsail Star. I believe it was a 'tween decker, because its tonnage was revised from 706 gt to 1205 gt without any modifications to the appearance of the ship. Regulations changed whereby shelter decks were reclassified from open to closed. 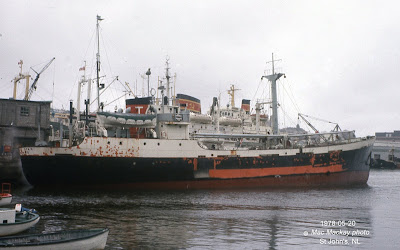 In 1986 it was reported to have grounded, but I have no details. In 1987 it was sold and reflagged to Honduras, and sailed to Miami. Renamed Princess Farrah in 1988 it became Florida I in 1994 and Ocean Alley in 1995 under Belize flag. On September 22-23, 1998 it was damaged by Hurricane George while in Port-au-Prince and towed back to Miami. Renamed Adolphus Busch* it was scuttled 5 mi SW of Big Keys FL as a dive site.
[* It was named for the founder of the Busch brewery, and the reefing financed by the brewery. The ship may have been renamed "Adolphus Busch I"or "Adolphus Busch Sr" before the sinking.  The ship has its own Wikipedia entry.]