While pawing through the shoeboxes (literally) looking for old photos of interest I came across one that I did not take myself, and there is no credit written on the photo. A little online research reveals that it was taken by Fotoflite,  a British service that specializes in photos of ships in the English Channel. Copies of the photo are available for BPD 18.30 which is well beyond my means for showing here.

The photo is perfectly focused and sharp with no grain. On the other hand my edited version has added all of that and a few other touches without destroying the essential look of the ship. 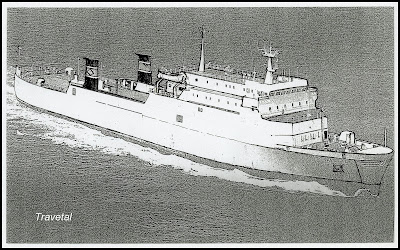 What caught my eye about this ship and its photo was its very brief, but pivotal connection with Halifax.

Newfoundland Canada Steamships Ltd operated the general cargo service between Halifax and St.John's.  In 1963 Halifax shipping entrepreneur A.C.(Ted) Huxtable bought the company from its parent General Steam Navigation Company of London (controlled by P+O Steam Navigation). At the time the service was maintained by a converted World War II corvette with trip charters from other companies such as Himmelman Supply's OK Service or others when there was demand. Huxtable was also owner of Halifax shipping agents F.K.Warren Ltd. 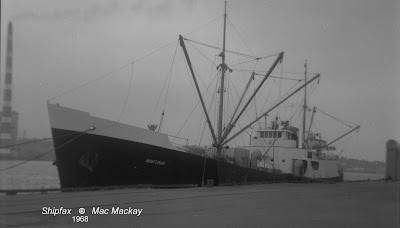 Bedford II, built at Collingwood, ON as HMCS North Bay was converted to a cargo ship/ reefer, Galloway Kent in 1947, and acquired by Newfoundland Canada in 1951. It was replaced by O.K.Service XI in 1969. Its sister Belle Isle II (ex Wellington Kent, HMCS Huntsville, HMS Woolvesey Castle) was destroyed by fire and sank after it was struck by Holmside in 1960.)

In November 1971 Autoport opened in Dartmouth. It was established to import foreign automobiles, but also to transfer North American made autos to Newfoundland. Canadian National Railway was the major shareholder in Autoport and was in direct competition with Canadian Pacific Railway which shipped autos from Saint John, NB to Newfoundland. [see following posts]

Newfoundland Canada Steamships and Clarke Traffic Services (partners in Dart Container Line) formed Trident Steamships Ltd to carry the Autoport traffic to Newfoundland but also the general freight and now containers arriving in Halifax at the newly opened container terminal Halterm. (CN and Clarke were partners in Halterm and Warren were agents for Dart, ZIM and Columbus container lines.)

Clarke and NCSS named the new company Trident Steamships Ltd and chartered the Travetal from J.A. Reinecke of Germany. To operate the vessel in the coastal trade it was transferred to a London based company Rollonoff Shipping and registered in Singapore, which at the time qualified the ship to operate under the British Commonwealth Shipping Agreement. This meant that the ship could trade between Canadian ports. However someone did not read the fine print, and the Seafarers International Union raised a ruckus against Trident for using German officers and Spanish crew - when the agreement required the crew to be citizens of the Commonwealth.

Travetal was built by Rickmers, Bemerhaven in 1970. It had a capacity of 200 cars and could also carry palletized general freight and containers. It measured 1597 gt and 2900 dwt. (Open car decks did not count as enclosed space for tonnage measurement.) The ship had a bow door and stern ramp. RoRo ships were very rare in those days, and this ship was one of the few of the very few its type.

Autoport had chartered Federal Hudson for three months to carry cars to Newfoundland, but it was a conventional three deck cargo ship and very inefficient and slow loading.

Travetal sailed for St.John's on its first trip in March 1972 after loading at Halterm and Autoport. It replaced O.K.Service XI (which carried general cargo and a few containers, but no cars). It also took cargo from its own special palletizing operation in shed 34. The plan was that the ship would also perform feeder services to New England through the port of Boston. 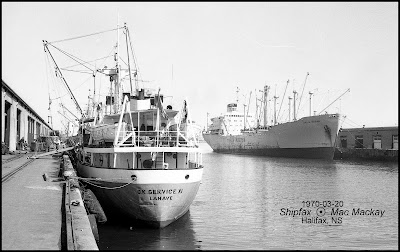 In early June 1973 the SIU took legal action and sailings were cancelled for a few weeks. A deal was worked out whereby five Canadian officers would be brought aboard to train to take over operation. The German owners did not like this arrangement which was in effect changing the charter to bareboat. On July 1 they "asked" the Canadians to leave the ship and under cover of night the ship sailed, without clearance.

On July 4 it was arrested in Boston. That was the end of Trident, and the ship was not seen in Halifax again. Once more the Province of Nova Scotia was on the hook for a $900,000 loan, of which $702,000 had been spent on setting up the palletizing operation. The line had also received a federal subsidy.

It was fourteen months before a ship was found and another service was started from Autoport to St.John's. And it was Federal Commerce + Navigation (Fednav) again that began operations in October 1974 with Federal Avalon (under Canadian flag).

Federal Avalon was small enough to berth inside the jetties at Autoport.

Today's operator, Oceanex, is a direct descendant of this service (although no longer owned by Fednav).

Amazingly the ship that was Travetal seems to be still in operation in Indonesia. After seven name changes it is listed now as Nusa Agung operating a ferry service from the port of Merak on Java crossing the Sunda Strait to Bakauheni.

More on the Fednav ships and others in following posts.