The giant floating crane Thialf anchored just off Halifax for the past couple of weeks has a constant shuttle service provided by the very large offshore tug/supplier Maersk Maker. I was able to catch the supplier returning from this morning's run with the crane in the background. 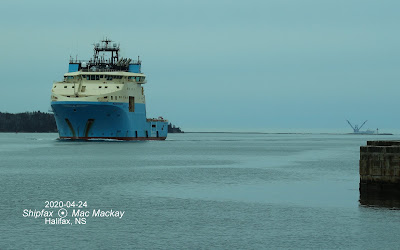 The supplier makes three or more shuttle trips daily, and requires a pilot for each run. Even though its destination is within sight, it is still outside the pilotage zone, but its huge size makes it look closer than the ten miles or so it is from my vantage point.

Up to 300 workers will be required on the crane when it begins work removing Exxon Mobil's Sable gas installations. They will certainly require transportation, and all sorts of supplies to be able to do the work and thus will be supported by at least one supplier. It will also be necessary to shift anchors and positions from time to time, and so a second tug/supplier may be needed. 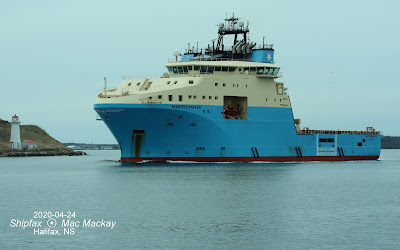 As described in a previous Tugfax post, Maersk Maker is sixth and last in a series of giant suppliers called the Starfish class built for Maersk's offshore division.

Another giant is arriving possibly this weekend. Bigroll Beaufort is a heavy load carrying ship, which will likely be used for transporting the components that Thialf will be lifting.
CORRECTION: Its visit is unrelated. Bigroll  Beaufort is carrying a pair of large wind turbines, including the monopiles, that will be installed 27 miles off the US coast. Thge cargo will be transferred to another vessel off or in Halifax.