New for Nirint, New for ONE [REVISED]

Nirint Shipping BV, the Dutch company that runs a Europe / Caribbean container line, has the contract to carry nickel sulfides from Moa, Cuba to Halifax on the return leg. (The mineral is sent from Halifax by rail to Fort Saskatchewan, AB for primary processing, then goes to Belgium by way of Montreal for final refining.) Nirint uses a variety of chartered tonnage, usually on charters of a year or more, but seldom renames the ships. Today's arrival, Hooge does not appear again on Nirint Schedules after this trip, so seems to be covering off  other ships, perhaps for drydocking.

Hooge was built in 2006 by Shandong Weihai Shipyard in Weihai, China. The 15,633 gt, 16,986 dwt ship has a container capacity of 1306 TEU, including 238 reefers and has a a pair of 45 tonne cranes. It is a multi-purpose ship and although classed as a single deck, fully cellular container ship, it also has general cargo capability. Number two hatch has been kept clear to allow for unloading the bagged nickel in Halifax without having to unload any containers.

The name "Hooge" is taken from an island in the Nordfriesland district of Germany. The ship is managed by Briese Schiffahrts, a German company, and other ships of the same class are also named after nearby islands. Canadians might be forgiven for assuming it was named after Hooge, Belgium, near Ypres, where there is a Canadian World War I military cemetery called Hooge Crater, but that is not the case.


The new to Halifax ship for Ocean Network Express is ONE Matrix, another of the former MOL ships repainted and renamed by ONE. 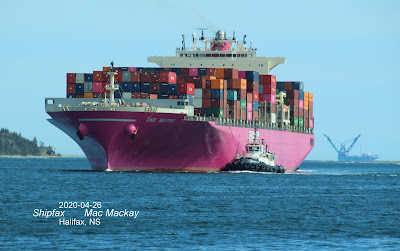 ONE Matrix works its way inbound to Halifax with the crane rig Thialf in the background.

Built as MOL Matrix in 2010 by Mitsubishi, Kobe, the ship was renamed in March of this year when it received ONE's magenta paint job. A 78,316 gt, 79,312 dwt vessel it has a capacity of 6724 TEU, including 500 reefers. It is another of ONE's contribution to THE Alliance's service along with several fleet mates of the same class. 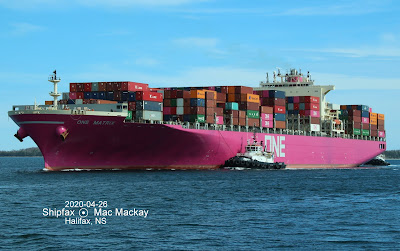 The ship's last port of call was Colombo, Sri Lanka on April 6 - a very long way between stops.

Its magenta paint is still fresh and has not yet been scuffed up by tugs (at least on the port side) but that will not be the case for long.
.
Posted by Mac at 4:53 PM