I didn't have time or room in my last post to cover all the Newfoundland coastal cargo ships in my photo collection so I am adding some more with this post. Many are former British coastal cargo ships that could be acquired relatively cheaply. There were several reasons for this, including preferential tariff treatment for Commonwealth ships, but also the relative demise of coastal shipping in the UK thanks to improved roads, and the reduction in the use of coal for power generation. 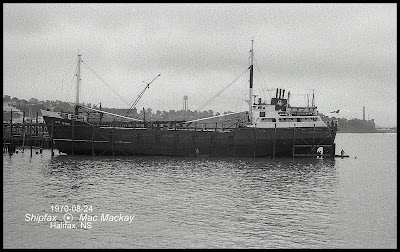 The old established St.John's merchants Job Brothers had their own shipping company called Blue Peter Steamships. All had reefer capacity and were used to ship frozen fish, for parent company Fisheries Products International, but also carried general freight as needed. Blue Peter had a widely mixed bag of ships including Blue Trader, seen above being hauled out at Dartmouth Marine Slips for refit. Built in 1956 by Mitchison, Gateshead as Eskwater, it was acquired by Blue Peter in 1958. The 627 gt vessel was sold in 1971 and renamed Sandy Point No.1 for Stephenville Shipping Co Ltd. They sold it foreign in 1976 as Sol Eclipse. It became Hancock Trader in 1978 under Cayman flag, but remained laid up until 1981 when it was sold again. As Chata Two it sailed south but was reportedly wrecked soon after, but was not deleted from Lloyds until 2001.

Blue Peter got into some newer shipping however. They had two ships built by Davie Shipbuilding in Lauzon in 1964, Blue Peter II and Blue Cloud. They were good looking ships of 1126 gt, 1038 dwt. Blue Peter II was flagged out 1972 and sold to Carib Reefers. Renamed Southern Star it continued in the fish trade from Newfoundland to the Caribbean. 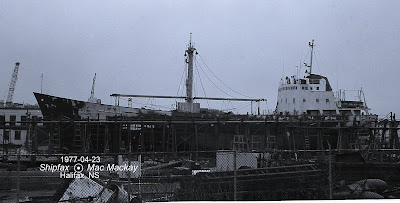 Southern Star gets a major refit, with hull plate replacement on both sides! It is not often you can see right through a ship.

In 1979 it was renamed Caribou Reefer II, under Panama flag. It continued to sail under that name until 1994 when it became Infinity, then in 1997 Randy R. Lloyds reported the ship as "hulked 18.3.09", and I have seen photos of it as late as 2010 partially sunken in Port of Spain, Trinidad harbour.

Blue Cloud became Southern Isle in 1972 and through various owners as 1979: Omega One, 1981: Biscayne Freeze, 1985: Coastal Nomad under US flag, working in Alaska and continued in service until 2005 when it appeared as Wave Runner working out of Seattle, however it too was reported as hulked in 2007. 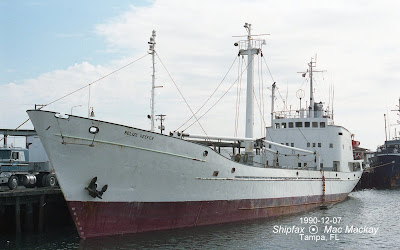 An older former British coaster was Mount Blair, built in 1949 by George Brown + Co, Greenock.
It carried the same name throughout its career, through a variety of owners including Joshua Winsor / Winsor Trading Co, and Claymorr Shipping Co Ltd. 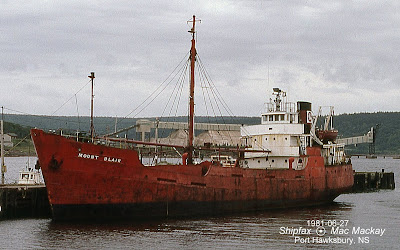 The ship was a constructive total loss after a grounding December 31, 1973. It was on CN charter en route to Port Saunders to load herring when it stranded at Plum Point, Old Ferolle Harbour. Despite massive bottom damage it was repaired and was again on charter to CN  in 1975 sailing to Goose Bay.
In 1981 it had a fire in St.John's and another in Port Hawskbury where it was laid up and sold for scrap. However another buyer was found and it came to Halifax in 1982 and sailed about July 12 (classed as a pleasure craft). It was later reported by Lloyds as "hulked at New York".

Another classic ex British coaster was the aptly named Newfoundland Coast. Built as far back as 1934 by Henry Robb, Leith, it was originally named British Coast 889 grt, 1400 dwt. Coast Lines Ltd operated the ship on a variety of its services including Liverpool / London, Liverpool / Leith and the wonderfully obscure Kirkcaldy / London linoleum run.) Acquired by the legendary Quebec skipper Roger Sirois in 1964 it became Newfoundland Coast for his Newfoundland Marine Services Ltd. 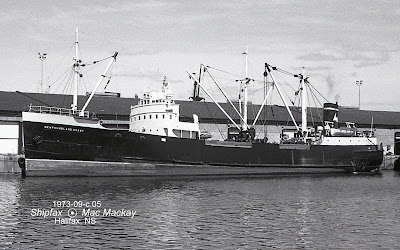 Capt. Sirois added the jumbo derrick aft and repowered the twin screw ship. It carried out numerous CN charters, including to Goose Bay. It also traded to the Caribbean and even made transatlantic voyages to Germany (1977) and Italy (1978).However it was sold in 1979 by judicial sale. New owners were named Labrador Shipping Co Ltd. I hope they did not paint over distinctive funnel marking of a map of Newfoundland painted in silver.

On July 14,1981 the ship was aground 16 miles west of Providinciales, in the Turks and Caicos and was declared a total loss.