Another in the series of posts relating to developments in Halifax Harbour over the past 50 years.

There are several sections on the topic of Coastal Cargo Ships.

In the pre-container era there was a wonderful variety of ships carrying freight between Nova Scotia and Newfoundland, the French Islands of St-Pierre et Miquelon, the Magdalen Islands in Quebec, the US east coast and the Caribbean and even parts of Nova Scotia where roads were not well developed.

The primary port for the Newfoundland trade was North Sydney where rail freight from Canada was loaded onto ships of the Newfoundland Railway (later CN) coastal fleet, and a plethora of small independent traders. Some of those smaller ships were contracted to CN, others had their own customers.

Every imaginable general cargo commodity was loaded out of North Sydney. Food stuffs, manufactured goods and even livestock made up the manifests. Bulk cargoes such as (predictably) coal and salt were sometimes bagged, as were potatoes.

Freight coming from Newfoundland consisted in large part of salt fish, but there were canned lobsters, salmon and some other odd cargoes such as berries, in season.

Halifax was very much a secondary port for Newfoundland traffic for CN. When ice in the Cabot Strait proved too severe, CN sometimes moved its operation to Halifax for a few days or weeks.

There were a few year round regular callers with general freight from Halifax for Newfoundland, and there were several small salt fish carriers that took away salt, potatoes or even filled shopping lists for their customers in Newfoundland. During the winter months some of these ships worked in the Caribbean and some even had a regular trade to the south.

By the 1970s the demand for salt fish in Europe and the UK had declined and much of the salt fish cargo was destined for the Caribbean. Before the Canadian Salt Fish Corporation was founded as a marketing board in 1970 independent companies handled their own sales, and the A.M.Smith Co in Halifax was a major dealer, and in return a supplier of fisheries salt.

By the 1970s refrigeration technology had advanced such that fish could be processed and shipped anywhere (often by container) and the need for salt fish, and the taste for it, was vanishing. So were the small cargo ships that brought the commodity to Halifax. 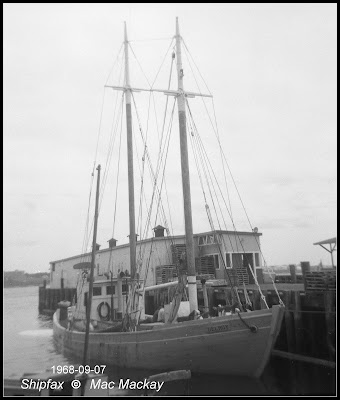 I have shown pictures and given an account of the Delroy here before:
http://shipfax.blogspot.com/2013/04/delroy-rescuer-awards-after-41-years.html

It is shown at the Irving wharf, next to A.M.Smith's (now the Maritime Museum of the Atlantic) . It was typical of the early type of motor schooner, with a small cabin and wheelhouse aft and forecastle forward. 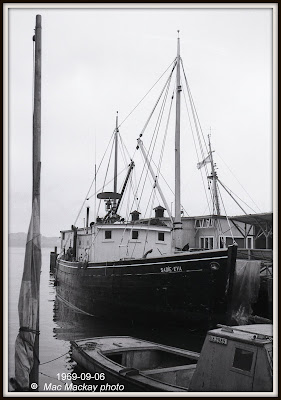 Sadie and Eva, pictured at the same berth, is typical of the later evolution of cargo vessels built on schooner type hulls. It has also been pictured here before:
http://shipfax.blogspot.com/2012/11/sadie-and-eva.html


As part of keeping wooden shipbuilding alive in Newfoundland, CN Marine's predecessor the Newfoundland Railway commissioned ten wooden cargo ships, often referred to as the "Splinter Fleet". They were all built at the Clarenville Shipyard in 1945.Their general form, with high bow and engines amidships, was copied by several later owners. 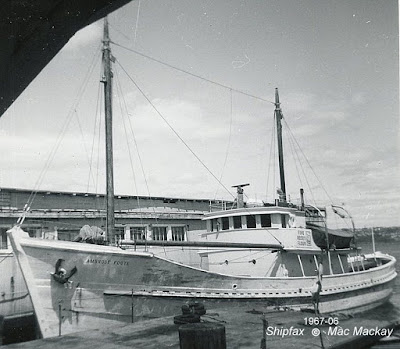 Ambrose Foote tied up at A.M.Smith's was the last Clarenville built wooden coaster, completed in 1964. Owned by J.B.Foote + Sons / Foote Shipping Co Ltd of Grand Bank, it was also the most graceful. It measured marginally less than 150 gt, allowing it sail without a licensed master.

In 1988 it was sold and renamed Lady Philpott II and in 1991 Meech Lake. In 1995 it was sold to American owners, and sailed as El Caminante under Honduras flag. It was reported on the Miami River in 1996 but its movement since are unknown to me. 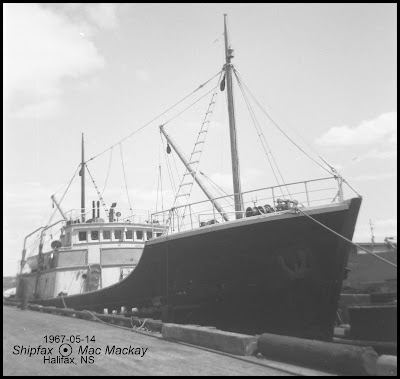 Sybil Eloise was also built in 1964, but at Little Bay Islands. Somewhat larger, at 273 gt, it was owned by Buffett Fisheries Ltd of Grand Bank, NL, it was named for Sybil Eloise Buffett (nee Hollett)(1913-1978) wife of Wilfred Buffett. 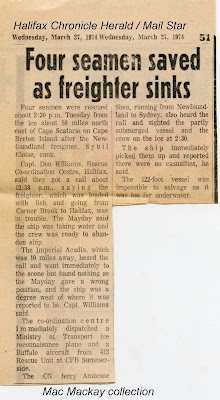 Most of the wooden vessels had similar fates with fires and sinkings all too common. Some were sent out on the annual seal hunt where several more were lost. However it was the advent of frozen fish and the demise of salt fish that put the final nail in coffin as far as these small traders were concerned. 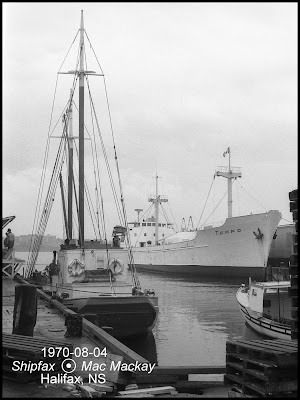 Small reefers like the Dutch Tempo were loading frozen fish all over Atlantic Canada and delivering it who knows where. At the same time, men on the left were grading salt fish as it was landed from Delroy. The tables with the sloped roofs over , where the salt fish was sorted, can also be seen in the Sadie and Eva photo above.


There were also Canadian flag reefers. One was the Caribou Reefer running between Ramea, Newfoundland and Gloucester, MA, returning with produce and general cargo. It often called in Halifax en route. It made some trips further afield as well, participating in Northern Supply in 1966, reaching Frobisher Bay.
A 1963 product of Collingwood Shipyard, the 490 tonner was reflagged to the Bahamas in 1976 and was sold in 1979, then carried the names 79: Polar Queen, 80: Toma, 87: El Cancun, 90: Transcargo, 91: Caonabo I. It was removed from Lloyd's in 2012. 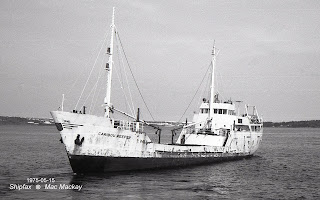 The other Canadian reefers were somewhat larger and therefore will be covered in another section.

One very unusual vessel made a visit to Halifax in 1967. Named Illex (the Latin name for squid) it had been a frozen bait vessel operated  by the Canadian Department of Fisheries for the Newfoundland frozen bait service. Previously named Arctica until a new vessel of the same name was delivered in 1963, it was sold in 1966 to the Earle Freighting Service. Its history however went back to 1918. 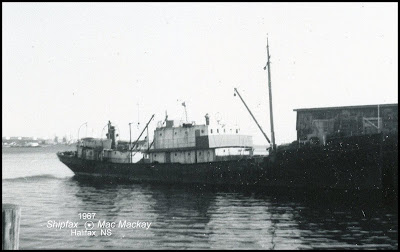 One of  a dozen trawlers built for the French navy by Canada Car + Foundry Ltd of Fort William, ON (now Thunder Bay) it was intended for minesweeping duties in the English Channel, with conversion to commercial fishing when that work was completed.

It was one of the more fortunate members of that fleet. Two sisters, Inkerman and Cerisoles were lost with all 78 hands November 24, 1918. They were crossing Lake Superior on their delivery trip and as a result none of the boats were delivered to France. They were all laid up in Boston and sold off. This one, named Malakoff , was acquired by the Newfoundland government. It may have been used as a patrol vessel since trawling was not permitted in Newfoundland except under special license.
It was re-registered in 1936, possibly when it was converted to a reefer motor ship.
Earle's made use of the ship for many years until it was finally scuttled in Conception Bay in November 1978.