One of the few accessible spots on the Halifax side of the harbour that is not a public park (and thus closed to the public) and not Port property and thus open only to authorized persons, overlooks pier 9C. Today, without coming into contact with another human being,  I was able to see where the action was. Only half the action is recorded here - the rest is on my Tugfax  blog.

The general cargo / container ship AS Laguna arrived from Miami on Monday. There does not seem to be much activity on board, so it is hard to know why it is here. It is clearly marked "Seaboard" so perhaps its has become suddenly unemployed. 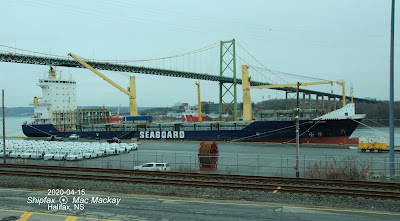 At Pier 9C - in the foreground some of the 350 cars offloaded by Grand Diamond on April 6 and in the background at the Bedford Institute, CCGS Capt. Jacques Cartier.

The ship was built in 2008 by the Yangfan Group shipyard in Zhoushan, China and is typical of the new breed of multi-purpose ships. It has box shaped holds and removable tween decks (when not in use they are stowed on deck in the frames just forward of the accommodation).  The 9996 gt, 11,775 dwt ship also has two deck cranes of 45 tonnes.

The ship was built as Hohefels, but from 2008 to 2016 was renamed CMA CGM Meknes, then reverted to Hohefels until 2017. If carrying containers it can handle 966 TEU, including 252 reefers.

The other ship at pier 9C is Maersk Maker, but you will need to go to Tugfax to see it and some other non-tug shipping activity.