We are stuck with historical characters  - warts and all - whether we like it or not. Denying that these characters existed doesn't work - sweeping them under the carpet is not possible. Nor is it desirable to keep them in the spotlight by glorifying them despite their defects, faults and obedience to cultural norms of the time.
Nevertheless there must be ways of naming ships without being controversial!

The Canadian Coast Guard has "put its foot in it" again with the choice of names for the latest offshore fisheries science vessel . CCGS Capt Jacques Cartier [there is no period after the abbreviated "captain" in the ship's official name*] recognizes the French navigator, cartographer, explorer and colonizer of the early 1500s. It is Cartier we have to thank for being Canada (he misunderstood the Iroquoian word kanata meaning village to mean the entire country).  The ship arrived at BIO March 6 for the first time after completion by Seaspan. 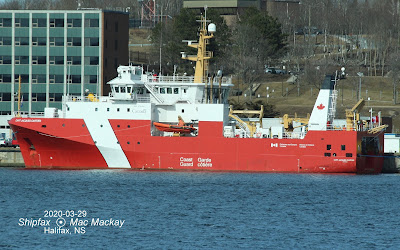 Capt Jacques Cartier at its new home at BIO.

There is no disputing Cartier's navigating skills - he charted much of the Gulf of St. Lawrence and St. Lawrence River for the first time and never lost a ship. His relations with indigenous people were mixed, particularly after he attempted the first year-round colonies near Quebec. Even though those same people saved Cartier and his crews from scurvy by sharing the recipe for what was likely spruce beer, he managed to alienate them by claiming the land for the King of France (as he was ordered to do.)

The CCGS had to use the term "Capt" because there was already a Jacques-Cartier registered in Canada. 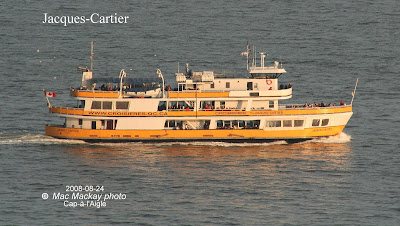 That significant ship has born the name since 1924, and is a virtual floating landmark. See my Navigation Quebec blog http://navigationquebec.blogspot.com/2015/10/post-2-jacques-cartier.html.
That particular ship has been laid up for several years and was to be brought back into service this year, but that is certainly in doubt now due to the pandemic. Nevertheless do we need two ships named for this man?

I know I am "famous" for carping about ships names, but the current policy is not only subject to political interference, but brings the Coast Guard and the federal government into disrepute by its poor, and in some cases thoughtless, choices. Naming ships after people has to be dangerous territory. Why not name ships after species of fish or marine life? One of the ships to be replaced in the current program is the Teleost named uncontroversially after the large class of ray-finned fishes. There are apparently 26,000 species in that group - lots of name choices there! 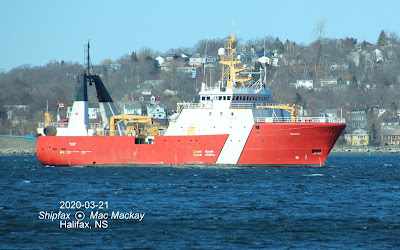 The other ship is named - wait for it - a former distinguished scientist, Dr. Alfred Needler CM, OBE, FRSC. 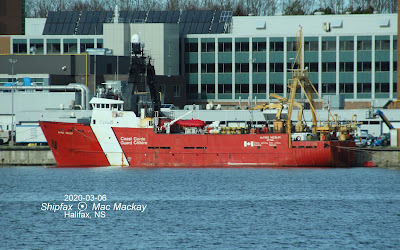 CCGS Alfred Needler, built in 1981 was named for a noted scientist.

*Another curiosity about Capt Jacques Cartier's name is that despite being named after a Breton, and resident of St-Malo, France, the name on the ship is rendered "en anglais".  A ship named after a person, in current French usage, should have a hyphen between the first and last names. The abbreviation "Capt" is presumably supposed to do double duty for Captain and Capitaine, but it would also be followed by a hyphen if rendered according to French usage. Interestingly the other ship named for the same explorer has had a hyphen since 1924.

Names for the other two ships in the series Sir John Franklin and John Cabot (aka Zuan Chabotto) are somewhat less controversial choices.